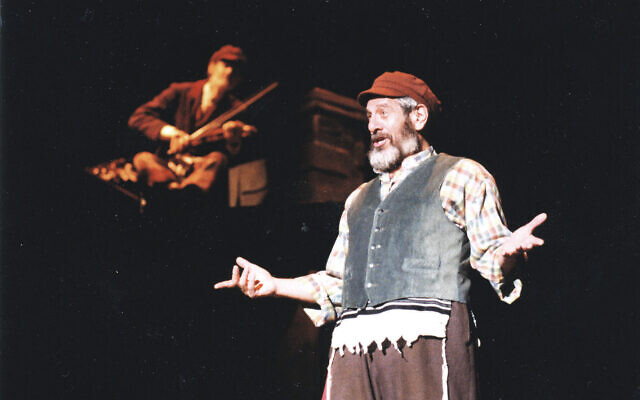 Chaim Topol performs in Fiddler on the Roof during his 1998 Australian tour. Photo: AJN file/Nigel Clements

When a Hollywood star who happens to be Jewish comes to town, it’s big news for The AJN, often making both the front page and the arts section.

Some stars, such as Barbra Streisand and Neil Diamond, rarely give media interviews, but other legends of stage and screen readily make themselves available.

When Mel Brooks – the New York actor-writer-director who has won the sweep of Oscar, Emmy, Grammy and Tony awards – came to Australia in April 2004 for the premiere of his Broadway musical The Producers, media interviews for the major metro dailies and The AJN were held in production-line fashion at the theatre, with each reporter having just five minutes. It was like a forerunner of speed dating! 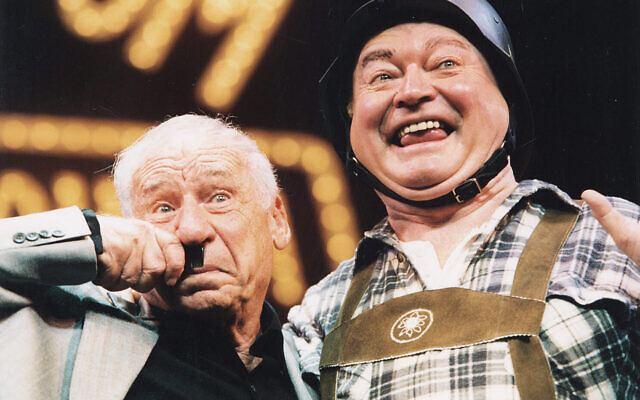 Mel Brooks (left) hams it up with Bert Newton at a media conference ahead of the premiere of The Producers in Melbourne in 2004.
Photo: AJN file/Peter Haskin

I had prepared enough questions for a half-hour interview in case Brooks wanted to discuss Jewish issues and go beyond the time limit, and promptly launched into a question about the Holocaust being an appropriate subject for humour.

Sure enough, after five minutes the interview was brought to an abrupt end by the show’s publicist, but Brooks had said enough to make a major feature in our next edition.

One of the biggest events on the Melbourne stage in 1998 was the hit musical Fiddler on the Roof starring Topol in the 2000-seat Regent Theatre.

The Israeli star, who had played the role of Tevye for more than 30 years in productions around the world, was set to break his 2000-performance milestone during the Australian season.

Before Topol started six weeks of rehearsals, I met him for an interview in his suite on the 40th floor of the Sofitel hotel. Looking across the panoramic views of the city, he asked where the East Melbourne synagogue was located – he had already been in contact with members of the Jewish community and was invited to attend shule on Shabbat.

Topol was delightful to chat with and generous with his time. And he took his job seriously, attending all rehearsals. He made a point of performing in every show, including matinees, despite a long season.

Topol revealed that when he first performed in an Israeli production of Fiddler on the Roof in the 1960s, he did not want to play Tevye. But when Israeli star Shmuel Rodenski became ill during the season, Topol stepped in for him. “It made me love the part.”

In my opening-night review of Fiddler on the Roof in the August 21, 1998 edition under the headline “Topol is tops!” I wrote that just to see Topol on stage was worth the price of the ticket. 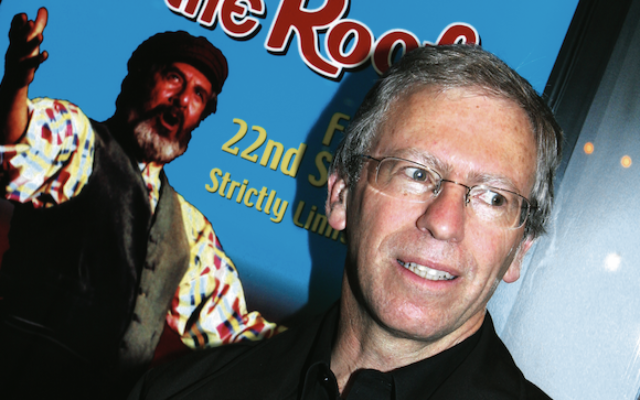 Danny Gocs at Fiddler on the Roof

The musical had a big cast, mainly non-Jewish actors, and the talk was that Topol accounted for the lion’s share of the budget. Topol returned for another Australian tour of Fiddler on the Roof in 2005.

In preparation for an interview with Hollywood actor and comedian Jerry Lewis, who came to Australia in 1999 for his cabaret shows, I did my research and came across a reference to an obscure film he made in the 1970s about a clown in a Nazi concentration camp.

The film, The Day The Clown Cried, was never released due to legal and political wrangles between the French and the Swedish governments of the time.

When I asked Lewis about it, his eyes lit up – here was something different to the standard questions he gets asked all the time. As a result my one-on-one interview went into overtime and produced an ­interesting article.

British actor Warren Mitchell gained worldwide fame for his starring role as bigoted Alf Garnett in the BBC TV series Till Death Us Do Part, which screened worldwide from 1965-75.

He regularly came to Australia to perform on stage in musicals and plays, and being a fan of his TV series in my student days, I was excited to interview him for a starring role in the musical Hello Dolly at the Arts Centre in 1994.

Before the interview his publicist warned me to focus on Hello Dolly and not ask about the TV series, as Mitchell had walked out of an earlier interview when asked about Alf.

But I need not have worried. Mitchell was charming and even brought up the subject when volunteering news of plans for a film based on Alf. He admitted that it would be difficult to play a bigoted, racist character in the politically correct culture that existed.

Prior to singer Art Garfunkel’s 1998 concert tour of Australia, I interviewed him by phone from New York. I was a big fan of Simon and Garfunkel’s music, even attending their Waverley Park concert in 1983. Sadly the duo split in 1970 and reportedly had rarely spoken in the ensuing years, despite reuniting on occasions for concerts.

Towards the end of the interview I asked Garfunkel whether he sees Simon. Garfunkel replied: “Do you?” followed by a long silence. Time to wrap up the interview.

With plenty of chutzpah, she spent the interval of each show charging patrons $15 a pop to have a photo taken with her posing bare-breasted.

Being a Jewish performer, of course I had to see her show and do a write-up. However, there was not much to rave about and in my review I wrote that the show was a fizzer!

These are just some of the overseas Jewish performers that I have interviewed since joining The AJN as arts editor in August 1991 under editor Sam Lipski, after previously writing about entertainment for News Ltd publications.

Of course, the bulk of more than 3000 interviews over the years were with local actors, authors, artists, producers, directors, filmmakers and others in the entertainment industry.

Now it’s time to hand over our arts coverage to Jessica Abelsohn. It’s farewell but not goodbye as I will continue to write the Arts Beat column as well as review local theatre and musicals, and take on subeditor duties.

For all arts news and queries, contact Jessica Abelsohn.