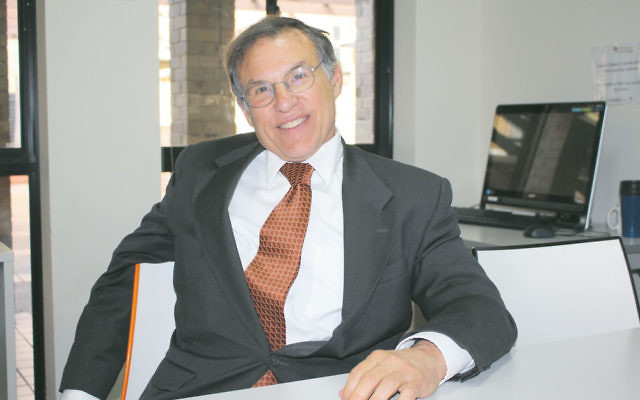 ARTHUR Feinsod’s play, Coming to See Aunt Sophie, pays tribute to Jan Karski, recognised as Righteous Among the Nations for his efforts during World War II to help the Jews.

As a young Catholic activist in the Polish resistance Karski tried, and ultimately failed, to warn the Western world to intervene to stop the Holocaust.

In Coming to See Aunt Sophie, which has just been staged at Sydney’s Figtree Theatre, the story is told from the perspective of an older Karski reflecting on his amazing experiences.

Yet less than three years ago, Feinsod, who is a professor of theatre at Indiana State University in the US, had never heard of Karski or his work to save the Jews.

“A dear friend of mine told me about him and sent me a book because she thought that I’d be the perfect person to write a play about Karski,” Feinsod told The AJN during his first visit to Australia to coincide with the stage production.

“I read it, and loved it, and then read a book that he wrote called Story of a Secret State and was very taken by it.”

Feinsod then began immersing himself in Karski’s letters and speeches.

“I spent about nine months immersing myself in everything to do with Jan Karski,” he explains.

Although Feinsod found the material fascinating, he still needed a personal link to Karski, so he contacted Karski’s best friend who had been his confidant at the end of his life, Kaya Mirecka-Ploss.

“She was 90, sharp as a tack and gave me tremendous insight into Karski as a man and what his last years were like,” he says.

“I used that and incorporated it into the play.”

Feinsod says he was moved by the stories he had heard about Karski, which included sneaking into the Warsaw Ghetto and infiltrating a concentration camp dressed as a guard, as well as escaping Europe to report what he knew to Allied leaders, including a personal visit to then US president Franklin D Roosevelt.

“Here was a non-Jew, a devout Catholic, who wanted to see for himself what was happening to the Jews so that he could report it to the rest of the world,” Feinsod explains about Karski.

“He was a great humanitarian. For him, it was like, ‘This is wrong. I need to do something about this. Why should someone else be doing it? If not me, who?’

“Karski felt that attitude deep in his soul. He risked his life to be sneaked into the Jewish ghetto … or to go into the transition camp disguised as a guard.

“Those stories really had a big impact on me when I first heard about him.”

Feinsod says it is important for younger generations to know of Karski’s heroism.

“The world is forgetting, sadly. Things are so comfortable now. We just think, ‘Oh, that would never happen again.’

“We all have to keep our brains about us to look at what’s happening in the world and say that we’ve got to take a stand against this. We need to help the other, and that’s what Karski stood for.”

Feinsod wrote the play in only three weeks, which he admits was “very fast”, as the Polish government wanted it completed for the centenary of Karski’s birth in 2014.

Feinsod looks back with pride to when the play was staged in Karski’s hometown of Lodz in Poland.

“That was very special,” he recalls with pride.

Coming to See Aunt Sophie was also staged in Warsaw, on the grounds of the old Jewish ghetto, which Feinsod says was “very moving”.

“There were Holocaust survivors in the audience who knew Karski,” he says.

Despite the context of the play being the Shoah, Feinsod stresses that “it’s not just a play for Jews”.

“I think it’s great that the Jewish community has embraced it, but I would also like to see it open to all audiences,” he says.

Ultimately, Feinsod says he would love an audience of Jews, Christians, Muslims “sitting together, being moved together, realising how important it is to have peace in the world”.

The Australian production of Coming to See Aunt Sophie was directed by Moira Blumenthal.