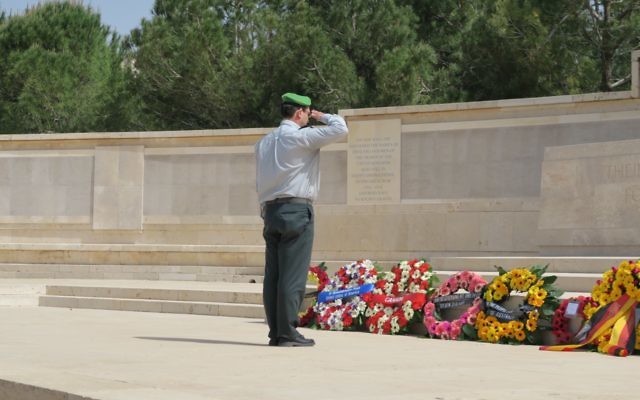 DIPLOMATS from Australia, New Zealand, Turkey and other nations joined Australians and Israelis at the annual ANZAC Day ceremony at the Mount Scopus Commonwealth Military Cemetery in Jerusalem.

Australian gap-year participants from B’nei Akiva, Betar, Netzer, Hineni and Israel By Choice (IBC) also attended the ceremony which they reflected was a moving tribute to those who fought for Australia.

“It is so wonderful that we have the opportunity to honour the memories of the brave Anzacs to whom we as Jews, and Australians, owe so much,” Hineni participant Tyla Chapman said.

IBC gap-year participant Ethan Kemelman said the group attended the ceremony to remember those who died and to celebrate the Australian spirit of those, who in hardship, displayed courage, mateship and self-sacrifice from afar.

“Such qualities were epitomised by the heroism of the Australian Light Horse Brigade and their triumph against Ottoman forces in Beersheba, the last successful cavalry charge, to open the way for General Allenby to liberate Jerusalem,” Kemelman said.

“The history of the Light Horse men and the Anzacs is history for us all, both as Australians and as Jews.”

Zionist Federation of Australia’s Israel office director Yigal Sela, who laid a wreath at the ceremony, said that it was important for the gap year participants to attend the ceremony.

“Despite Anzac Day falling during the Pesach break this year, I am very proud of our program participants that they felt a need and responsibility to be present at such an important ceremony, that here, in Israel, symbolises more than anything else, the very close relationship between Israel and Australia, and especially the Jewish community there.”

The service was also attended by the Australian and New Zealand contingents from the United Nations Truce Supervision Organisation (UNTSO) and the Multinational Force and Observers (MFO), who are in the Middle East as a part of UN peacekeeping missions.

After the formal ceremony, gap year participants went to the Jewish section of the cemetery where a short service and Kaddish was led by Australian Rabbi Raymond Apple in honour of the Jewish soldiers buried there.

Meanwhile, East Melbourne Hebrew Congregation’s Rabbi Dovid Gutnick, a chaplain for the Australian Army Reserve, led prayers at the dawn service for his regiment at the University of Melbourne.

With more than 300 people in attendance, Rabbi Gutnick, who annually attends ithe ceremony, said while it was a chance to reflect, it was also “very beautiful, with birds chirping and likeminded people together”.

He added it is one of the only services that “isn’t wedded as much to the Christian tradition as it brings together lots of different denominations and ethnic backgrounds with Muslims, Jews and Christians there.”

Following the “meaningful” dawn service, he said the regiment went “back to the mess and had drinks and played traditional Anzac Day games but I couldn’t partake in much of the drinking because it’s Pesach”.

In Sydney, ADF chaplain Rabbi Yossi Friedman attended a dawn service at Booralee Park in Botany on Monday where he laid a wreath on behalf of the Jewish community, before marching in the Anzac Day parade.

“It was uplifting seeing thousands of people who had gathered to acknowledge the sacrifices made by so many in past wars, and to give tribute to our current serving members,” Rabbi Friedman told The AJN.