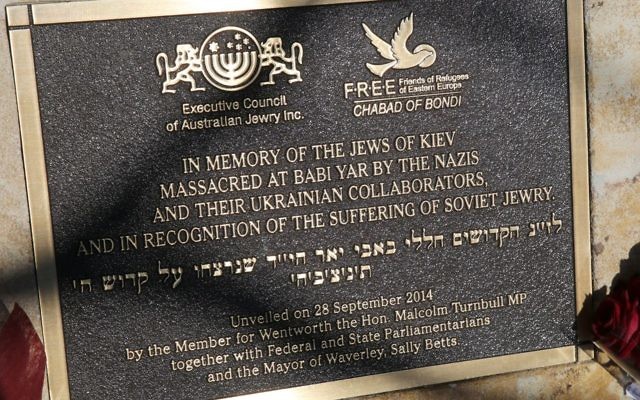 HUNDREDS gathered to commemorate the anniversary of the Babi Yar massacre – in which nearly 34,000 Jews were murdered in two days in Ukraine in 1941 – at ceremonies in Sydney and Melbourne on Sunday.

Addressing the NSW event at Waverley Memorial Gardens, Federal Member for Wentworth Malcolm Turnbull called for zero tolerance for racism, and said we cannot treat the history of the Holocaust as something that is in the past. “It is not an ancient tale. Yes, [it happened] decades ago, but the lessons must be learnt and relearnt, again and again.

“Only a few days ago, in this area, on Rosh Hashanah, you had people distributing leaflets which echoed the anti-Semitism and the hatred that led to that massacre.”

He said the Labor and Liberal parties are “absolutely, shoulder to shoulder united in our opposition, in our steadfast resolve, to oppose racial hatred and racism wherever it is found in the world but, above all, here in Australia”.

The event saw the unveiling of a plaque in memory of the Jews of Kiev who were massacred by the Nazis and their Ukrainian collaborators, and in recognition of the suffering of Soviet Jewry.

Executive Council of Australian Jewry (ECAJ) public affairs director Alex Ryvchin, who was born in Kiev and came up with the idea of establishing a plaque, said it will serve as a permanent tribute to the Jewish dead and should inspire all who walk past it to learn about the destruction of European Jewry.

“We cannot change the past but we have a duty to honour the memories of the dead and to ensure that their stories and their lives do not slip into anonymity. I hope that those present who lost family at Babi Yar or in similar massacres throughout the Soviet Union will draw strength from the knowledge that we will never forget what they endured,” he said.

Speaking to The AJN at the ceremony, Deputy Labor leader Tanya Plibersek said, “As an Australian community, we absolutely should always reject anti-Semitism.

“At the moment there’s a rise in abuse on the street of the Muslim community, there’s increased tension between different groups in the Australian community reflecting conflicts overseas and a growing sense of suspicion in Australia, which is poison for all of us.

“That type of conflict, suspicion, antipathy is something that we need to work very hard to prevent and remove from our community.”

The event was organised by ECAJ, FREE, the Australian Association of Jewish Holocaust Survivors & Descendants, the NSW Jewish Board of Deputies and the Sydney Jewish Museum.