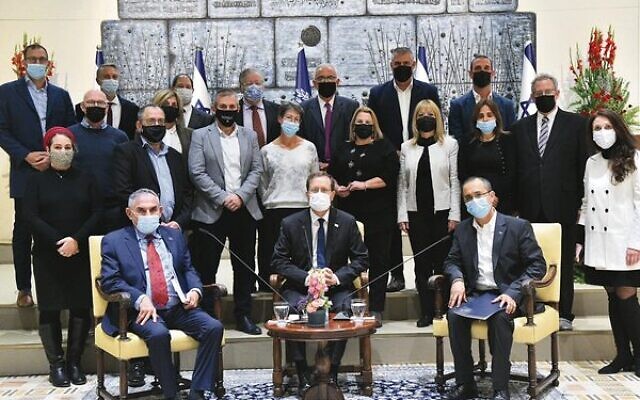 Australian Friends of Ariel University’s Paul Nailand, Geoff Levy and Rabbi Benji Levy joined the senior leadership of the university and representatives of other friends groups at a gathering hosted by Israeli President Isaac Herzog at his official residence last week.

As well as commending the institution for its positive influence on regional relations, Herzog noted its crucial contribution to improving relations among the citizens of Israel by embodying diversity and multiculturalism on its campus.

He also praised its commitment to underrepresented communities, recognising its innovative support programs benefiting students from the periphery and the Ethiopian community.

“It was a privilege to be hosted by the President in his ‘home for the people'”, said Nailand, “and even more rewarding to hear his sincere recognition and appreciation of Ariel as the ‘university for the people’, a key organisation of Israeli higher learning.”

Ariel’s senior vice-president, Bobby Brown, remarked that the gathering, though formal in nature, had a warmth and intimacy to it as Herzog knew most of the guests quite well.

Australian Friends board member Dr Danny Lamm, meanwhile, joined the Ariel University family this week in extending its sympathies and condolences to Herzog on the passing of his mother, Aura, former first lady and widow of Israel’s sixth president Chaim Herzog.