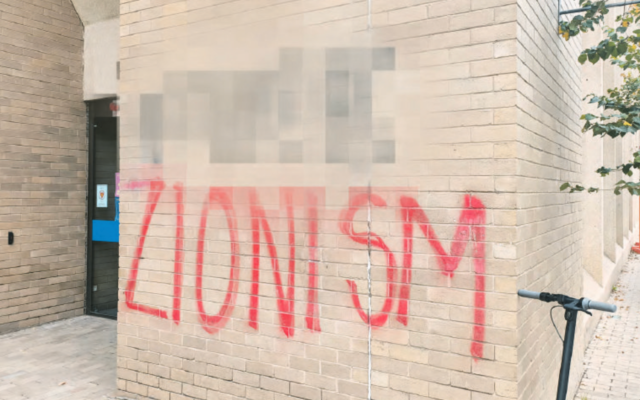 There is a story that emerged from Kristallnacht, of the Jews of one German town being forced to line up and spit on a Torah taken from the ransacked synagogue. To the delight of the sneering Nazi thugs, even the most observant of the community did so, choosing debasement over death.

When it came the turn of a Jew named Slater, long lapsed and a known criminal, he responded, “I’ve done a lot of miserable things in my life, but this I won’t do.”

Slater showed us that the Jewish essence resides within each of us and while it may lie dormant for considerable time, it can never be extinguished.

The antisemitism we face today is of an entirely different character and severity. But the hatred of our people can also slumber. When it rises, and it always does, it is with an almighty lash.

In statistics compiled by the Executive Council of Australian Jewry, we see a steady rise in incidents. We hear of horrific cases of antisemitic bullying and abuse in schools, a toxic campus environment and regular instances of vilification and harassment.

Grappling with antisemitism begins with the will to do so. Leadership matters. Securing the endorsement of the International Holocaust Remembrance Alliance (IHRA) definition by the then prime minister Scott Morrison and Prime Minister Anthony Albanese was a crucial achievement for our community. Now the ECAJ is determined to ensure the definition is used in the forum where Jews feel most vulnerable, the university campus.

We have seen the baiting of Jewish students through metres high “f*ck Zionism” graffiti and a sequence of student council resolutions each seeking to outdo the other with how many slurs can be inserted into a single motion. The unmistakable aim of this is to silence Jews. To show them that their acceptance comes at the cost of relinquishing something sacred to virtually all Jews, an emotional or ideological connection to Israel. It forces them to spit upon an inseverable part of being Jewish.

IHRA gives institutions a tool to understand what antisemitism is and how it presents today, in order to apply their policies and complaints systems when Jews in their care are targeted.

Direct intervention in schools is another vital piece of the ECAJ’s education strategy. Standing before students as a Jew, to tell our story, to answer the questions of the curious, builds empathy and weakens the appeal of antisemitic slurs and conspiracy theories.

The ECAJ has successfully piloted a program in partnership with our Catholic allies to teach Catholic educators about antisemitism. This empowers educators to teach this to their students, year on year.

The ECAJ will also shortly commence missions to Israel for academics.

To reinforce these endeavours, the ECAJ will distribute to schools, journalists and politicians, a new book by this writer, slated for release in the new year titled The Seven Deadly Myths, which investigates how antisemitism takes hold in minds and in societies, being through a series of myths of ancient origins which survive to this day.

These measures are critical at a time when, owing to both malice and ignorance, antisemitism is so poorly understood.

As John Safran wrote about last week, a Greens member of the South Australian parliament opposed the adoption of IHRA because, “It is not clear what is a Semite … [which] includes a much broader range of people than the Jewish people.”

As Safran further noted, an article in the Green Left Weekly recently spoke of “anti-Arab antisemitism”.

Both instances are a form of erasure, a tactic popular among despotic regimes and their enthusiasts, that seeks to obliterate the true meaning of words thus vaporising the thing itself. The aim here is to place antisemitism beyond the grasp of understanding and therefore beyond counteraction.

The antisemitism of the left-Stalinist variety has always traded in euphemisms to maintain the façade of anti-racism and claim the moral high ground from political enemies.

From the 1950s, “Jew” gave way to “Zionist”, while classical themes and slanders were retained – the tentacled beast manipulating the media, governments and finance; the lust for the blood of the innocents, the obstacle to a better, purer world.

They equate Jewish-Israelis with those who slaughtered their kin in forest pits and death camps. They hold the very concept of a state for the Jews as a racist endeavour while having no complaint with the idea of the nation-state itself, of which Israel is but one of many. They shrug at French, German or Polish policies to maintain a national character in a tumultuous world while decrying the presence of the menorah or Star of David on Israeli postage stamps as evidence of a diabolical regime ripe for toppling.

The denials and gaslighting deployed by these antisemites have made teaching an understanding of antisemitism even more urgent.

IHRA and our other education measures de-cloak these insidious forms of antisemitism by equipping administrators with a clear definition and examples that look beyond form and appraise the substance of what is said and done.

Education for its own sake is futile. We must educate through a combination of real-life encounters with Jews to demonstrate who we are as a people and a community; by imparting knowledge of antisemitism and the ruin it brings; and providing the tools to both understand and take action.

Napoleon said, “Without education there is no present and no future.”

With this education, our future as Australians and Jews will be protected and the forces against us will be exposed for what they are.

Alex Ryvchin is co-CEO of the Executive Council of Australian Jewry.