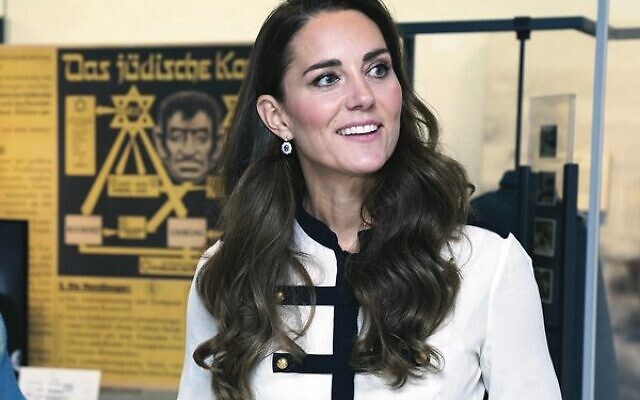 The Duchess of Cambridge at the Imperial War Museum.

THE Duchess of Cambridge has officially opened an exhibition of photos of Holocaust survivors at Britain’s Imperial War Museum (IWM), including two pictures she took as part of an initiative to mark the 75th anniversary of the liberation of Auschwitz.

The exhibition – designed to celebrate those who built new lives in the UK – was brought to life by a partnership between the UK Jewish News, the Holocaust Memorial Day Trust, the Royal Photographic Society, Dangoor Education and the IWM, where it will remain until January when it will go on a national tour.

Yvonne Bernstein and Steven Frank, who the Duchess photographed, were among the survivors at the event. While COVID precautions meant she kept a one metre distance from most, she couldn’t help but hug a thrilled Steven.

The 86-year-old survivor of several camps, who was photographed with his granddaughters Maggie and Trixie by the Duchess, told the UK Jewish News, “I’ve never been hugged by a future queen before. She was so warm and, like two years ago, wanted to hear my story.”

Trixie, 15, added, “My grandpa tells his story in local schools but the Duchess being here means more people will know what happened. She was so cool.”

For a beaming Yvonne, who had been a hidden child in France and was accompanied by granddaughter Chloe, the reunion was the very first time she’d been out beside for basic food shopping since the start of the pandemic. She too received a kiss and a hug.

The Duchess was guided by IWM director Diane Lees. Officially opening the landmark Second World War and Holocaust Galleries, she was shown exhibits including a V1 rocket and a box from the secret Oneg Shabbat archive of the Warsaw Ghetto.

“Given that this period will sadly soon pass out of living memory, we want these galleries to preserve the stories of our veterans, our eyewitnesses and our survivors, and ensure that we never forget what they experienced,” said Lees.