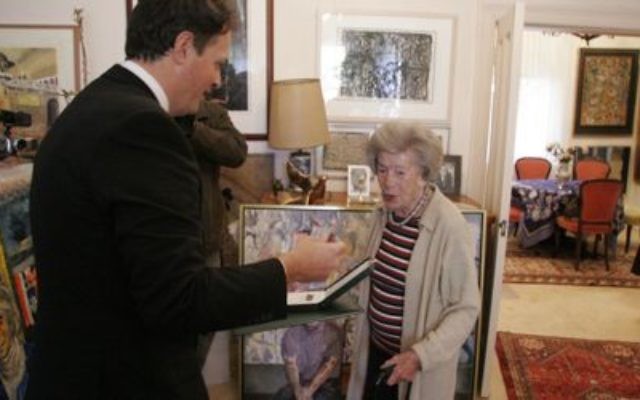 ARTIST Judy Cassab completed a unique treble last week when she was honoured by the Hungarian Government with the highest award bestowed upon a civilian, the Gold Cross of Merit.

Her son, John Seed, said the family was extremely excited. “I think there is something very special about this honour because it’s a full circle,” he said.

Cassab was born in Vienna in 1920 to Hungarian parents and she moved to Hungary when she was nine years old.

In 1932, aged 12, she began painting, but when World War II broke out she was sent to a slave labour camp. She survived and migrated to Australia in 1951.

Cassab is the only person to have won the Archibald Prize twice – in 1961 and 1968 – and she is one of Australia’s most famous artists.

Hungary’s Ambassador to Australia, Gabor Csaba, said her art has been recognised across the world.

“Back at home, everyone knows Judy Cassab,” he said. “The country is grateful to the contribution that many Hungarians have done to enhance the reputation of our country around the world and Judy Cassab is someone that has done a lot to make a good name for our country.

“I personally have been in touch with her for many years and she is a very good human being with fantastic achievements.”

Csaba is approaching the end of his four-year term as ambassador, but he wanted to honour Cassab before he left, so he contacted both her son and the Hungarian Government.

“I can count on one hand the number of times I have been able to give anyone an honour like this because this is the highest honour we can give her, but she deserves this,” he said.

Meanwhile, Cassab has also announced she will donate more than 400 pieces of her art to regional galleries around Australia, and the Sydney Jewish Museum.