IN April 2020, when Australasian Union of Jewish Students (AUJS) activist and federal merakez (president) of Bnei Akiva Australia Eddy Lichtig was asked to join Monash University’s Monash International Affairs Society (MIAS), he never thought he would be put in a position where he would be responsible for saving lives.

The AUJS Victoria political affairs director was involved in the club to represent the university in debates with students in Afghanistan over Zoom – specifically young women who were part of a think-tank called Afghanistan Progressive Thinking.

But when Afghanistan’s capital Kabul fell on August 14, one of his lecturers, the director of Monash Gender, Peace and Security Centre Jacqui True, felt a responsibility to help the Afghan scholars, teachers and activists involved in the debate program, knowing that many of them would be condemned to Taliban ‘kill lists’.

Knowing Lichtig had a broad network of political connections and a strong passion for humanitarian work, True called on him to join the small team of staff and students. Their mission was to help the young female activists escape the soon-to-be Taliban-controlled Afghanistan. 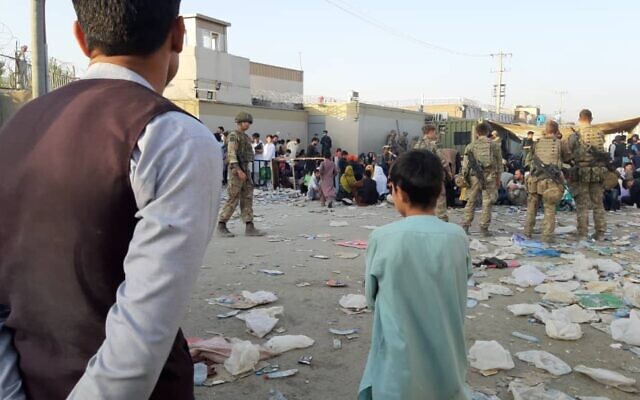 After the groups had made it through Abbey Gate, they tried to get the attention of Australian troops who were required to check their visas.

Each member of the group needed a 449 humanitarian visa, which are incredibly hard to obtain. At the time, the Australian government had allocated 3000 of these visas to Afghans, understanding that many were fleeing for their lives.

Lichtig immediately started calling his parliamentary contacts – a list he had built up through his leadership roles in Jewish youth movements and AUJS.

“We have to move very, very quickly because they’re searching for these women,” Lichtig told more than 10 politicians from across the political spectrum.

The Monash University student, who also had ties at the Department of Foreign Affairs and Trade (DFAT), was granted access to a live channel where he was fed intel; instructions on how to move the women from the back to the front of the thousands-strong queue – a three-to-five-day journey.

At this point, the dedicated team had committed to rescuing 19 Afghans who had fled their homes, their families and their belongings and deserted their cars on the side of dusty roads to escape Taliban rule. 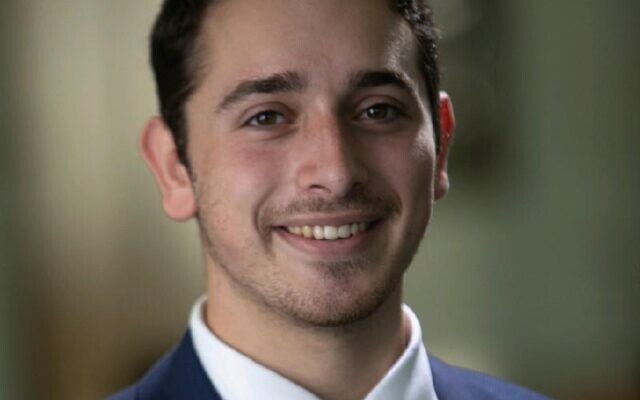 Splitting up the group to give them a better chance, Lichtig began feeding information via phone calls and texts to the person with the best English, instructing them on how to move through checkpoints carefully on the way to the congested and dangerous Kabul airport.

“Sometimes I had to tell them to – or not to – respond to the Taliban. I told them where they should go, where they should stop,” Lichtig told The AJN. This also meant coordinating with the allied troops on the ground.

The young advocate, working with True and six other students, took shifts throughout the night, the mission becoming a 24-hour task. Similar groups around the world were also guiding desperate Afghan citizens trying to escape.

“A lot of people failed when those they were helping in line at the airport lost all stamina and courage and went home because it was way too difficult,” lamented Lichtig.

“Sometimes they had to wait five days in horrible conditions. They have to bring enough food and water. It’s freezing at night but boiling in the day. There is always a threat of being beaten up or told to turn around.”

But the sleep-deprived 22-year-old, who put his leadership roles and study on pause to dedicate 21 hours a day to this operation, knew he had to keep those he was guiding motivated and moving. 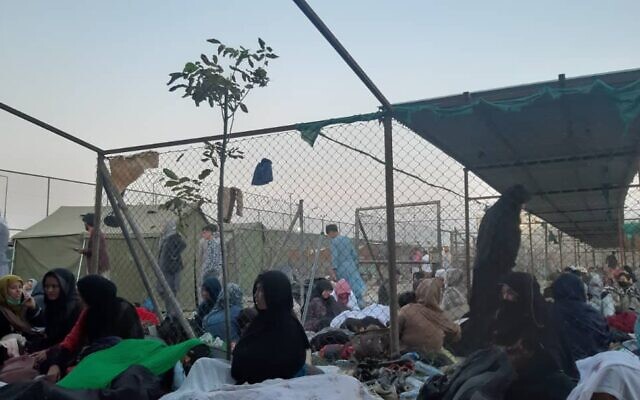 Once their visas had been processed, they waited here inside the airport for a day until they were boarded onto planes. This was the location where one of the suicide bombings occurred only 20 hours later.

Hearing word of a planned bombing, the team picked up the pace. At 3.30am (Australian-time) on August 24, the remaining three groups were at the final gate, ready to present their visas when Lichtig received word that one of the women’s brother and mother, who were with her, did not have the necessary papers.

“If you get to the front of the line and you don’t have a visa, you get told to go all the way to the back,” Lichtig told The AJN.

Lichtig began to scramble, contacting his government connections, desperate to get visas that usually took weeks or months to process ready in a matter of hours.

After sending through their details to a senior advisor at DFAT, Lichtig received a text back at 3.45am which read that they were heading into the office then to process the 449 visas. Just eight hours later, by noon, the visas were ready to go.

At this point, 11 of the Afghans remained. Two groups, traumatised by the constant gunfire, herds of desperate people and cruel conditions, decided to turn back, returning home to their villages knowing that they had a target on their backs.

After the evacuation efforts came to a halt, Lichtig was notified by one of the groups – a family of five – that they had made it safely to Canada, but there has been only radio silence from the other group.

While Lichtig told The AJN it was difficult watching people lose hope and turn back in the final days of the operation, he also reflected on what he had achieved. 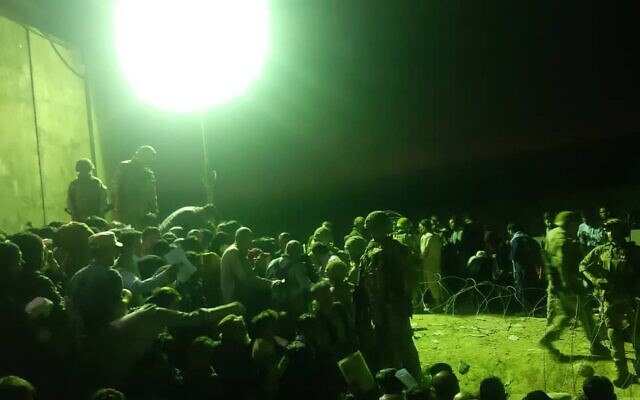 The night when Lichtig began scrambling to process two extra visas after it was revealed that two more people without documents were also in line. This was considered one of the most dangerous areas due to stampedes.

“After negotiating visas, coordinating intel, convincing them not to go back to their houses and telling them to keep moving, there was a moment of relief in the 10 days of almost no sleep,” he wrote in his diary.

The final group had passed through the last gate and were watching young boys kicking a ball around with the Allied troops.

“From Taliban soldiers with gunshots and beatings to Allied soldiers playing soccer, we knew at that point they were in safe hands,” Lichtig wrote in his diary.

“As they played soccer, I was then reminded of my time studying in yeshiva, as I gave a shiur [lecture] on Sanhedrin 37a: ‘Whoever saves a single life is considered by scripture to have saved the whole world.’ I could not believe I had just done all that,” Lichtig continued.

Around 20 hours after the last group boarded a plane to Dubai, the suicide bombings that killed 60 Afghan civilians and 13 US troops occured within metres of where they had been waiting a short while earlier. 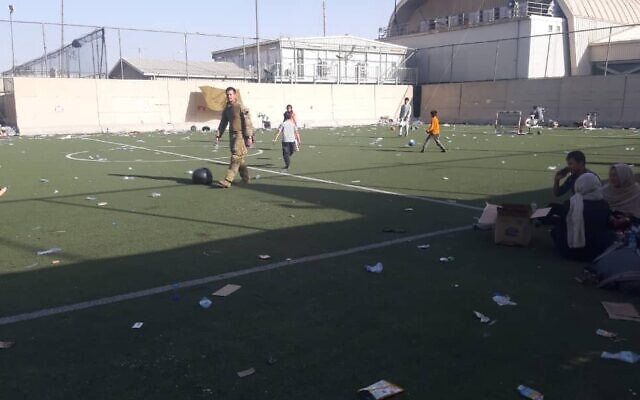 One of the groups watching young boys play soccer as they waited to board planes to Dubai.

After 10 days in Dubai, the 11 Afghans touched down in Australia where they completed two weeks in hotel quarantine before being welcomed to Monash University.

“I knew my impact was small, as I sat in my ‘HQ’ in my room in lockdown in Melbourne. But I knew that I had just saved lives.”

The team has given the group, who are now all students at Monash University and living on campus, a home and a future.

One of the rescued women told The AJN, “I am eternally grateful for being taken out of a place of lost hopes and complete despair to a nourishing environment where there is a hope for a change, and we owe that to the unconditional support of an incredibly kind group of people whose devotion to a greater cause, and a humane world, gave our lives a new direction.” 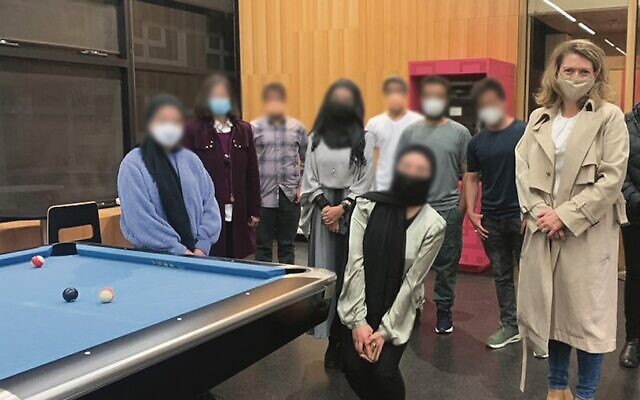 Noting the “journey to safety was extremely dangerous,” she added, “At every step, someone from Monash University was there to help and support. It felt like finally we were heard and cared about.

“It was very heart-warming to have someone watch out for us, someone like Eddy whose consistent support gave us strength to continue.”

True told The AJN that Lichtig’s work was “incredibly important” to the success of the mission.

“Eddy was an impressive operator – we could not have succeeded in our efforts without him – his unwavering commitment and belief in our cause,” she said.

Monash’s deputy vice-chancellor and senior vice-president Professor Sharon Pickering said she could not be more proud of the MIAS team.

“We felt a responsibility to do everything we could to protect them, especially as the views they’d expressed in our forums placed them in increased and grave danger,” she said.

“They’ve lost everything. They’ve left loved ones in Afghanistan and have experienced a devastating exit from their country,” she said, adding that she hopes the community would be able to offer support to them.

Monash University has launched an appeal to support and resettle students who have fled Afghanistan. For more information, visit monash.edu/afghan-scholars-appeal.