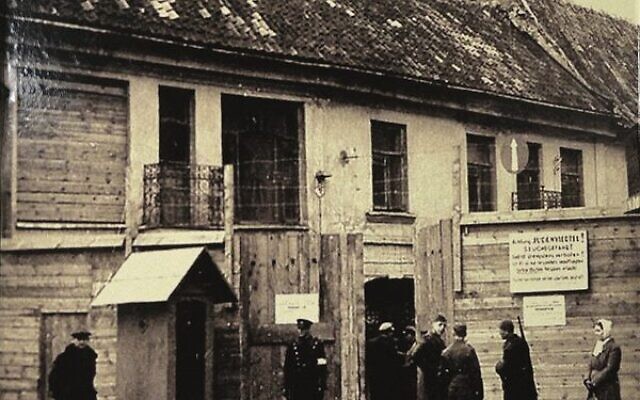 Main entrance to the Ghetto of Vilnius in Lithuania, during WWII. Photo: Wikimedia Commons – public domain

You know, there were so many world-famous Litvak writers, doctors, scientists, intellectuals, humorists, Nobel winners, activists, artists and Torah geniuses that it takes about three minutes to roll the names in the film, and then at some speed. And these were only what Wiki yielded – just last week I learned that the late great Rabbi Lord Jonathan Sacks, the man who changed my own life, was Litvak through his mother.

Any other people or nation on earth would boast about it until the cows came home. But not us. Not the Jews. We kvell furtively, privately, fearfully. I know my list of brilliant Litvaks induces a significant wave of ethnic buttock clenching: Okay, already! Very nice but do you have to be so … public?! So boastful! Especially these days! (Here’s the glorious Jackie Mason on the subject.)

But I did not have a choice. My film J’Accuse! is perhaps, above all, a demand for Jewish honour. So the list is in, and proudly so. And from what I gather, the Yidden are loving it. Good. We should be proud and stand tall, especially when confronted by deliberate insult.

The Noreika insult beggars belief. Let me summarise: the Lithuanian government, via its Orwellian Genocide Centre, has manufactured a crude mythology based on lies in order to hero-worship a notorious mass murderer, thief and polemical antisemite. Jonas Noreika murdered as many as 14,500 Jews in conditions of unimaginable cruelty and his guilt has been known for decades. Most recently Noreika’s own extraordinary granddaughter, Silvia Foti, has axiomatically blown apart the pathetic denialists in Vilnius. Her book, Storm in the Land of Rain, and her devastating testimony in the film J’Accuse! has left them looking naked, nasty and ridiculous.

These are some of the Jews of Plunge who were dehumanised and murdered under Noreika’s watch.

The rabbis and old men tied to horses by their beards and dragged to death for public entertainment.

The young girls of Plunge dragged from their homes and raped to death in drunken parties in the woods, then dismembered.

The scores of high school girls from Plunge tricked into a Christian conversion then mockingly executed along with everyone else and thrown into a pit.

The old, frail men burned or beaten to death in the Demon Dance drinking game.

The men, women and children of Plunge starved for three weeks in their own synagogue amid the stench of rotting bodies and human waste, then massacred.

Please imagine if the 2400 men, women and children who were raped, robbed, tortured and murdered in Birzai alone, after 600 years of peaceful life there, were Black. Or Irish. Or American. Or Muslim. Or anyone who has pride in their identity. I don’t believe any other nation on earth would accept such an insult.

But we Jews accept this Lithuanian insult with barely a murmur of protest. Worse still, important players in the global Jewish community gobble up their trinkets, gongs, favours and God knows what even as they carry on brazenly Holocaust-lying to our faces. Do these important Jews bring up the subject of Noreika and Silvia Foti at all? Do they feel it is unimportant? And precisely on whose behalf do they talk?

Honestly, many of us simply cannot understand it. Perhaps someone with close ties to Lithuania can explain. We will listen respectfully. But patrician silence is no longer an option: the devastating testimony of Silvia Foti in her forensic book Storm in the Land of Rain and in the film J’Accuse! make this an urgent discussion.

In my view there really is no choice. If we do not honour ourselves, no one will. And who could possibly blame them?

Michael Kretzmer is a UK-based filmmaker and former journalist who is determined to fight for justice in Lithuania.