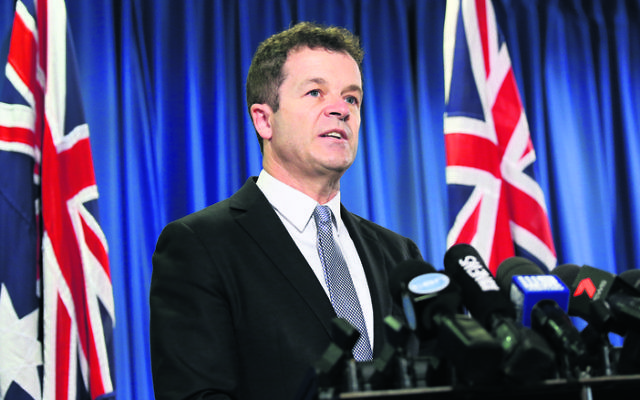 The AJN reported on June 8 that under the new legislation, which will replace the ineffective Section 20D of the Anti-Discrimination Act, individuals who incite or threaten violence against the Jewish community could be jailed for up to three years.

With the support of Labor, the new legislation, which will create a new offence in the Crimes Act of publicly threatening or inciting violence on grounds of race, religious affiliation, sexual orientation, gender identity, intersex or HIV/AIDS status, was expected to sail through the Legislative Council on Wednesday afternoon.

“The laws will help protect individuals and groups from being targeted by cowards who seek to cause physical harm to innocent people,” Speakman told The AJN.

“A very clear message has been sent to offenders. We will not tolerate behaviour which risks people’s safety simply because they belong to a particular group.”

He added, “I want to thank the Jewish community in particular for its vigorous advocacy for these laws.

“The community’s leadership in helping to make this reform a reality has helped to strengthen the law and support people to go about their lives without fearing for their safety just because of who they are or what they believe.”

NSW Jewish Board of Deputies CEO Vic Alhadeff, who campaigned tirelessly for the new laws as spokesperson for the Keep NSW Safe Coalition – which represented the concerns of 21 different communities – said it was very gratifying to see the legislation attract multi-party support.

“Full credit [goes] to the government for drawing an important line in the sand and making it clear incitement to violence will not be tolerated, and to Labor and the minor parties for supporting it. This is a great day for the people of NSW,” he said.
Many of the speakers acknowledged Alhadeff’s contribution during the debate in the Legislative Council on Tuesday.

Davidson MP Jonathan O’Dea, whose electorate has a large Jewish population, highlighted the case of Hizb ut-Tahrir spiritual leader Ismail al-Wahwah, who in 2015 called on people to “rid” the world of the Jewish “hidden evil” and declared “the ember of jihad against the Jews will continue to burn”.

“This law should capture such incidents and make it easier to prosecute and convict the deliverer of that message,” O’Dea said.