Palestinian suporters of Morocco watch the Qatar 2022 World Cup quarter-final match between Morocco and Portugal, in Nablus, in the West Bank, on December 10, 2022. Photo: Nasser Ishtayeh/Flash90

Celebrations were held across Israel, the West Bank and Gaza on Saturday evening as ecstatic soccer fans marked the Moroccan national team’s historic victory over Portugal at the World Cup quarterfinals.

Morocco beat the Portuguese squad 1-0 in Qatar, knocking mega-star Cristiano Ronaldo out of the tournament and making the Atlas Lions the first African and first Arab team to reach the World Cup semifinals, set to face tournament favourites France on Wednesday.

Jubilant soccer fans across the Middle East and Africa have adopted the team as their own, with many noting that the Moroccan side — which also beat Spain in the round of 16 — has proved victorious against teams from countries that historically had colonised the North African kingdom.

There were celebrations in Arab communities throughout Israel, with fireworks set off in the northern towns of Wadi Ara, Baqa al-Gharbiyye and Bu’eine Nujeidat.

Drivers ecstatically honked their horns in Umm al-Fahm, and candies were handed out in the streets of Tayibe to celebrate the Moroccan victory, the Walla news site reported.

However, there were reports of sporadic clashes in East Jerusalem between local residents and police who were accused of using excessive force to break up the celebrations.

“The police dispersed those celebrating and used violence,” an unnamed local resident told the Ynet news site. “We celebrated just like everywhere else, but unfortunately they wanted to deny us the joy brought by the Moroccan team.”

There was no comment from police on the matter.

In the southern town of Tel Sheva, a 17-year-old was arrested for throwing a rock at a police car during celebrations in the wake of the Moroccan win. 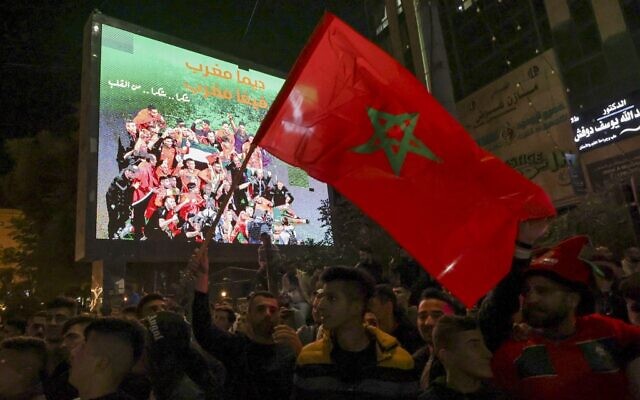 Palestinians celebrate Morocco’s win over Portugal in the streets of the occupied West Bank city of Hebron after the Qatar 2022 World Cup quarter-final football match between Morocco and Portugal on December 10, 2022. Photo: HAZEM BADER / AFP

Morocco has deep cultural and religious ties with the Jewish state, and hundreds of thousands of Israelis come from Jewish families that fled the North African kingdom.

Those ties have been enhanced further in the wake of the Abraham Accords, which saw Rabat normalise its ties with Jerusalem in 2020.

“I’m happy, but it’s not because I have Moroccan roots but mainly because I support the underdog and Morocco played smartly, using the tools it had,” Rafi Nidam, CEO of the SC Ashdod soccer team, told the Walla news site. “I love the little guy playing soccer against the greats and I absolutely do not rule out them winning the World Cup. Their success should inspire Israeli soccer.”

“Obviously, it’s not the most encouraging to see them rushing to celebrate using the Palestinian flag, but I don’t know if that is directed against us,” Nidam said.

Morocco’s victory in Qatar has also touched Palestinians, with the players and many of their supporters expressing solidarity on and off the field during the World Cup.

Palestinian flags were regularly featured in groups of Morocco’s supporters in Qatar and among fans celebrating in Europe.

Some members of the Moroccan team have themselves unfurled Palestinian flags on the pitch to celebrate wins. 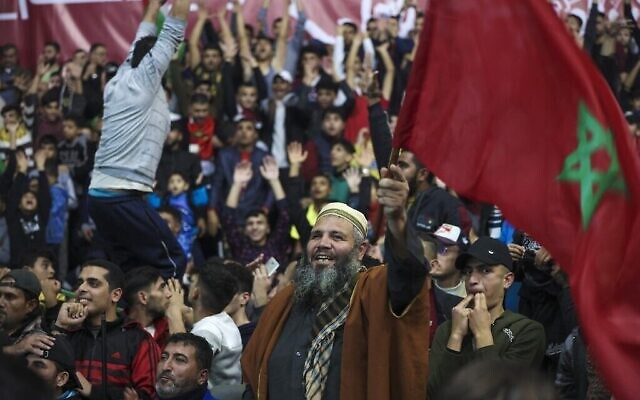 In Gaza, Palestinians packed cafes and a sporting hall that was turned into a free World Cup viewing venue by Qatar, cheering and rejoicing at the victory.

Some held posters with Palestinian and Moroccan flags and a slogan that said: “One People, One Country.”

“It’s an indescribable feeling. I swear, it’s as if it’s Palestinians that were playing,” said Ibrahim al-Lilli, a Morocco supporter in Gaza.

Similar scenes were seen in the West Bank. Palestinians took to the streets, cars honking and people waving Palestinian and Moroccan flags.

In Nablus, a video posted on social media showed groups of Palestinians chanting “Morocco!” under the watchful eye of Israeli soldiers across the street.

In Ramallah’s Arafat Square, thousands danced and sweets were distributed when the game ended, “while car horns blared and fireworks and celebratory gunfire rattled through the night,” the Guardian reported.

Times of Israel
Agencies contributed to this report.