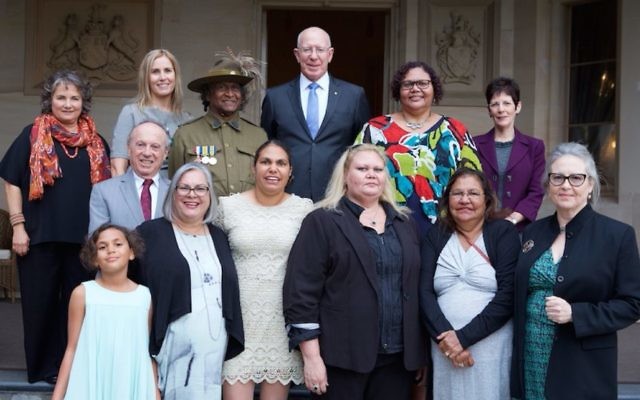 THIRTEEN Australian Aborigines made history in Israel last October when taking part in the re-enactment of the pivotal Charge of Beersheba on its centenary in front of the Prime Ministers of Israel and Australia, on behalf of their Indigenous Digger ancestors who served in the Sinai–Palestine campaign.

But there was one more unforgettable ceremonial moment left in store for 11 of the participants of the Rona Tranby Trust (RTT) Australian Light Horse Project, who were able to attend a special morning tea at Sydney’s Government House late last month, hosted by NSW Governor David Hurley and his wife Linda.

After a heartfelt Acknowledgment of Country by group member Pastor Ray Minniecon, Hurley – a former chief of the Australian Defence Force – expressed his gratitude for their ancestors’ service as Light Horsemen in the successful campaign that liberated the Middle East from Ottoman rule, including what is now the State of Israel.

“At that time, Aboriginal and Torres Strait Islander people were neither recognised as Australian citizens, nor included in the census and, ‘officially’, were not permitted to serve,” Hurley said.

“The fact that they did serve, despite these factors, lending their skill and horsemanship to this campaign has been, up to now, a mostly untold and neglected part of our history within our Anzac commemorations. Fortunately, this is about to change through the initiative and the work of the Rona Tranby Trust.”

Two of the group’s ancestors – Jack Stacey and Charles Stafford – fought in the victorious Charge of Beersheba, with the 4th Australian Light Horse Brigade.

Sadly another ancestor, Ernest Firth, died in action in a different battle, and is buried at the Anzac War Cemetery at Beersheba.
Doris Paton, who travelled from country Victoria, spoke on behalf of the group and presented the Governor with a project journal and shirt.

RTT was established in 1991 from a bequest in the will of Thomas Rona – a Shoah survivor from Sydney – and provides grants to support the recording and preservation of Indigenous Australian oral history.

The project’s participants will now record their ancestors’ stories, as told by their family and community members.