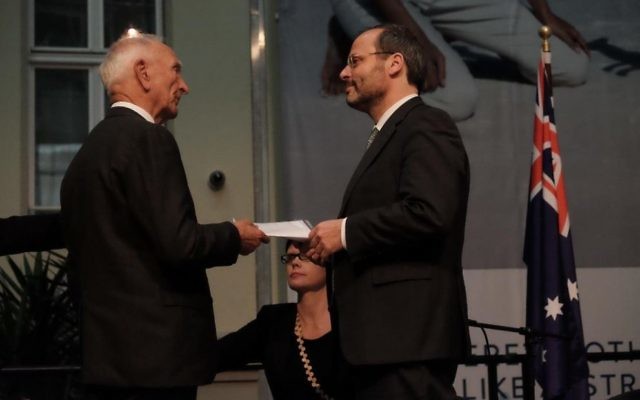 AN Aboriginal letter of protest to Nazi Germany against the horrors of Kristallnacht has finally been accepted by the German government 79 years after it was initially offered at the door of Melbourne’s German consulate in 1938.

Coming from a marginalised Indigenous community a world away from Europe, the petition organised by William Cooper, head of the Australian Aboriginal League (AAL) was the only known private protest in the world after the Nazi pogrom that shattered Germany and Austria’s Jewish communities on November 9-10, 1938.

The Aboriginal petition, brought by Cooper and AAL members to the door of the Nazi German consulate in Collins Street on December 6, 1938, condemned the “cruel persecution of the Jewish people by the Nazi government of Germany”.

Seventy-nine years after Cooper’s delegation was refused entry into the consulate, today’s German government made amends.

On November 8, at the Australian Embassy in Berlin, Cooper’s grandson, Alfred Turner, known as Uncle Boydie, presented a copy of his grandfather’s letter to Dr Felix Klein, German ambassador for Relations with Jewish Communities.

Also present at the handover were Lauren Bain, deputy Australian ambassador to Germany, Abe Schwarz, convenor of the Legacy of William Cooper project, and Dr Philip Bliss, chair of the Council of Christians and Jews Victoria.

Formally receiving the letter, Klein expressed “my deep respect and sincere gratitude to Uncle Boydie as a representative of William Cooper and the Australian Aboriginal League in the fight against the persecution of Jews in Nazi Germany”.

The 1938 resolution “gives testimony to the condemnation of the persecution of Jews, by the Aboriginal people of Australia and their strong commitment to unity and solidarity among the people of the world”, said Klein.

“I wish to assure you in the name of the Federal German government and my fellow citizens, of the lasting remembrance of the victims of persecution and those who stood up against it.”

Schwarz was asked by Uncle Boydie to read out the protest letter. On the next two nights, November 9-10, capacity audiences in Berlin listened to the story of Cooper’s stand.

And in a solemn ceremony outside Berlin’s Jewish Community Centre, Uncle Boydie and his son Lance listened to an annual roll call of Berlin Jews who perished in the Shoah.

Executive Council of Australian Jewry executive director Peter Wertheim noted Cooper’s protest “was a remarkable affirmation of humanity and decency in the face of evil”, occurring at a time when “Aboriginal people themselves were denied citizenship and other basic human rights in Australia and were frequently subjected to appalling physical, social and economic privations”.

Jewish Community Council of Victoria president Jennifer Huppert said: “The JCCV is delighted that this important historical letter has now been accepted by representatives of the German government. We welcome Uncle Boydie’s action in completing the mitzvah started by his grandfather William Cooper so many decades ago. This will forever create a strong bond between the Indigenous and Jewish communities, built on a bed of common humanity, respect for human rights and the desire to build a better world.”