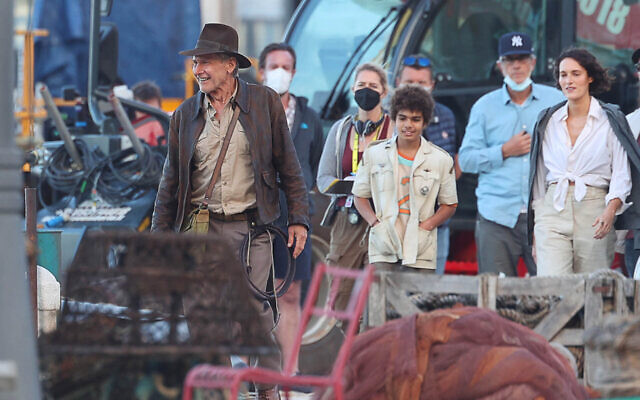 Harrison Ford and Phoebe Waller-Bridge are seen on the set of Indiana Jones in Sicily. Photo: Robino Salvatore/GC Images via Getty Images/JTA

The fifth movie in the Indiana Jones series will plop Harrison Ford’s heroic archaeologist into “a castle swarming with Nazis” in the year 1944, according to new plot details recently revealed. Digital de-aging technology will be used to make Ford appear young again for the opening sequence before the film transitions to the year 1969.

Leaked set photos had previously hinted that Nazis would be involved in the story to some degree, but the full details were not known. The image of Indy fighting Nazis with his bare fists became an iconic part of series lore after its first entry, 1981’s Raiders of the Lost Ark, but the most recent go-around, 2008’s Indiana Jones and the Kingdom of the Crystal Skull, was set in the 1950s and swapped Nazi villains for Soviets.

Although the character is not canonically Jewish, Jones is known for staring down antisemites over Biblical artifacts in the first and third entries in the series, making him something of a Jewish folk hero.

In the universe of the series, Hitler’s army has been subjected to cosmic punishments for attempting to exploit holy items.

Set to be released next year, the still-untitled fifth Indiana Jones movie will co-star Phoebe Waller-Bridge and Mads Mikkelsen, and it is the first not to be directed by Steven Spielberg, who has handed the reins to James Mangold, whose other credits include Logan and Ford v. Ferrari.