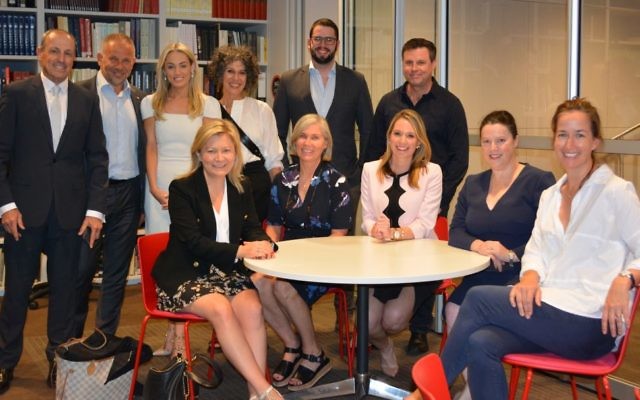 FROM the Daily Telegraph to Huffington Post Australia, from Seven News to SBS, from The Australian to The Sydney Morning Herald and from 2GB to Sky News, eight senior journalists, editors and producers shared their thoughts on Monday night on an intensive week-long study mission they’d recently been on to Israel and the West Bank.

Addressing community members at the Sydney Jewish Museum, Daily Telegraph news director Anna Caldwell said Israel had “captured my heart and my mind”, adding there were “so many signs of hope” on the trip.

“Every day we saw Israelis and Palestinians working side by side – they all wanted peace.

“It was this grassroots level of possibility that I felt really needed to guide the leadership of the future.”

“It was remarkable to see the trust in their eyes for the Israeli people taking care of them,” Campbell reflected. “They’ve been brought up all their lives to think that Israel is the enemy, and Jews were almost like the devil. They’ve been brainwashed all of their lives.

“And yet here they were, they found themselves so desperate that they put themselves at the mercy of their perceived enemy, and Israel responded with love, with compassion and cared for them.

“I just found that so incredibly moving.”

Seymour quoted Masri as telling the delegation, “I’m hoping that the Palestinian Authority (PA) will govern their people better if they have something to lose.”

He went on to observe that “one side is willing to wait out until there is only one Palestinian state”, and noted that during the trip the journalists were shown TV programs where five-year-olds with Kalashnikovs were pledging to become martyrs.

“I’ve seen those shows before, in Lakemba, in Fairfield, in Greenacre with these same stations, Hamas TV and PA TV, being broadcast by satellite into Australian homes,” Seymour said. “It’s increasingly becoming everyone’s problem in the West and democratic free world.”

Editor of The Sydney Morning Herald Lisa Davies was cautious about the way forward between Israel and the Palestinians, noting that the solutions currently put forward are “so far from being reality until the parties return to the negotiating table and the intent of both sides can be properly assured”.

“I feel both sides appear at least tacitly willing to let the status quo exist for a while, rightly or wrongly,” Davies said.

She was particularly moved by the bomb shelters in Sderot, which are painted with colourful patterns for children “so they don’t get scared of them when the Hamas missiles land”.

“The children are taught, as soon as the siren goes off, they have to run really fast and the first one there has to sing the song the loudest because that will drown out the sound of the missiles. I thought of my nieces and nephews. That’s no way to live.”

Editor-in-chief of Huffington Post Australia Tory Maguire said as a parent she could not understand why residents remain in a city which is constantly the target of rocket attacks.

“The people of Sderot have chosen to live there, that is a choice that I find really difficult to comprehend,” she said. “They could move if they really wanted to, they’ve made the choice not to, and so their children are living with that choice. I really struggled with that.”

Sky News journalist Caroline Marcus, who is Jewish, said if people moved out of Sderot there would be new boundaries, Hamas would attack another place, and the residents would just have to move from there. “Why don’t the Israelis just get out of Israel completely because they’re under attack there from all sides? I understand why people stay,” Marcus said.

On a lighter note, executive editor at SBS Sally Roberts declared that the hummus in Australia can’t be compared to the hummus in Israel. She said she was also impressed by the determination of young female Members of Knesset.

2GB producer Zac McLean said he returned from the trip with an “incredibly strong sympathy for the Palestinian public”.

“Many of the Palestinian people are really sick and tired of the stalemate at the top – they want their living conditions to improve,” he noted. “We still saw people with smiles on their faces – you felt that it was the leadership holding everything back.”

Highlights of the trip included visiting Yad Vashem, key religious sites, the Palestinian cities of Ramallah and Bethlehem, and top-level briefings with officials from both sides of the conflict.

The mission was organised by the NSW Jewish Board of Deputies, and supported by the JCA Haberman Kulawicz Wolanski Fund.