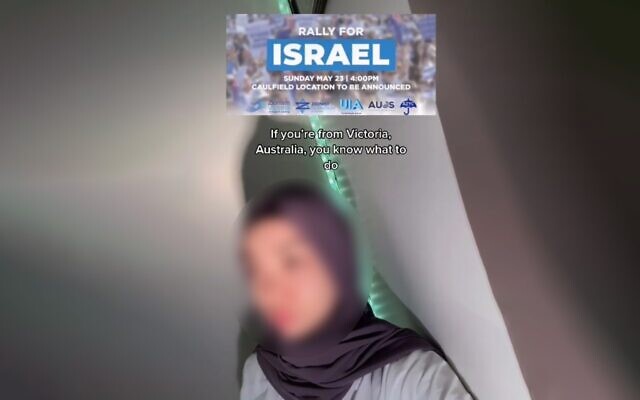 A screenshot from the TikTok video.

A PLANNED rally in support of Israel is set to go ahead in Caulfield this Sunday afternoon despite a TikTok video emerging on Tuesday night inciting violence against the Jewish community.

The video – posted by a 19-year-old Muslim woman, which has since been removed – featured the “Rally for Israel” flyer which contains the date and time of the event. The caption on the video read, “If you’re from Victoria, Australia, you know what to do.”

In the video, the woman performed a hand gesture while Islamic music played in the background. It had more than 75,000 views and more than 1000 comments.

Several of the posts incited violence, including: “I’m pulling up with AK-47s”, “Should we get the IEDs? [improvised explosive devices]”, “We coming to burn their flags”, “Who’s trying to shoot?” and “Soon Inshallah”.

“Police are aware of a planned rally in Caulfield on Sunday and will have a visible presence in the area to ensure there is no breach of the peace and provide community safety,” the spokesperson told The AJN.

“Officers understand the right to protest but with this right also comes responsibility. We won’t tolerate anti-social, criminal or violent behaviour that compromises the safety and rights of others.”

Speaking to The AJN on Wednesday morning, Yossi Goldfarb – president of Zionism Victoria, one of the organisers of the rally – insisted the event will go ahead, but with a possible change of venue.

“We’re planning to go ahead and we’re working closely with CSG and police, and as the situation unfolds we’ll continue to speak to them and take their advice,” Goldfarb said.

“At this point we’re going ahead … the community can be comfortable that all measures have been taken to make sure everyone is protected and safe.”

Stating, “This event will show Australia and Israel that the Australian Jewish community stands in solidarity with Israel and its right to stop Hamas rockets,” Zionist Federation of Australia (ZFA) president Jeremy Leibler told The AJN earlier this week, “We are united when we declare that there is absolutely no moral equivalency between Hamas actions that try to kill as many people as possible and Israeli actions that have one purpose – to end Hamas attacks.”

Echoing the sentiment, United Israel Appeal (UIA) Victoria president Hayley Southwick said, “Coming together as a community is crucial in demonstrating our solidarity for our brothers and sisters in Israel. We have a responsibility in the Diaspora to keep Israel strong and at a time when they need our expression of solidarity the most, I implore members of the community to unite this Sunday.”

She added, “With the growing antisemitic and anti-Israel sentiment circulating locally, it is important to get as many people there as we can.”

Zionism Victoria advises that people wishing to attend this Sunday’s rally will be notified of the venue via community networks.