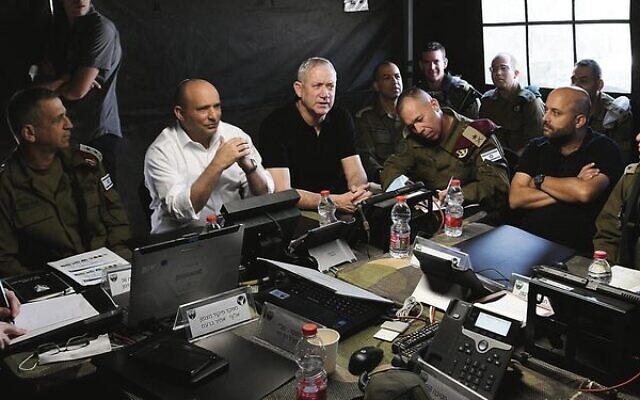 TOP Israeli officials have called on world powers to take action against Iran, ahead of the scheduled resumption of nuclear talks in Vienna later this month, while warning that Jerusalem was prepared to act alone if necessary against the Islamic Republic.

“We have been seeing Iran’s policies within Iran in terms of its nuclear program and in terms of its armament outside of Iran and its influence in Syria and Lebanon,” Defence Minister Benny Gantz said on Tuesday after visiting an IDF exercise in northern Israel.

“The world needs to act against Iran, and Israel is prepared to do what is needed on all of these fronts and on the northern front in particular.”

While Israel is primarily concerned with Iran’s nuclear program, which has been steadily advancing towards a potential atomic weapon, the Israeli military also warns of Tehran’s efforts to establish permanent bases of operation across the Middle East through a network of proxies, primarily Hezbollah in Lebanon, the Houthi rebels in Yemen and Shiite militias in Syria and Iraq.

Last month, a number of drones and other munitions reportedly launched by Iranian proxies struck near American positions in the area of al-Tanf in southern Syria.

Prime Minister Naftali Bennett, who also visited the exercise, expressed distrust of the nuclear negotiations that are slated to restart in two weeks, and the limited response by the US to the al-Tanf attack and other acts of aggression by Iran.

“We are dealing with Iran and its proxies, in Lebanon and Syria. No matter what happens between Iran and the world powers – and we are certainly concerned about the fact that there is insufficient severity in dealing with Iranian violations – Israel will protect itself with its own forces,” said Bennett.

In recent weeks there has been a significant increase in the number of attacks on Iranian-linked targets in Syria that have been attributed to Israel. In recent days, a number of top American officials have visited Israel to discuss the Iranian nuclear issue.

In a meeting with Rob Malley, the US special envoy on Iran, Foreign Minister Yair Lapid reiterated Israel’s position that Iran is simply trying to buy time with negotiations over its nuclear program until the issue of rejoining the 2015 nuclear deal is no longer relevant, according to Ynet.

The Foreign Minister reportedly told Malley that Iran has no intention of returning to the deal, which the US pulled out of in 2018 under then-president Donald Trump.