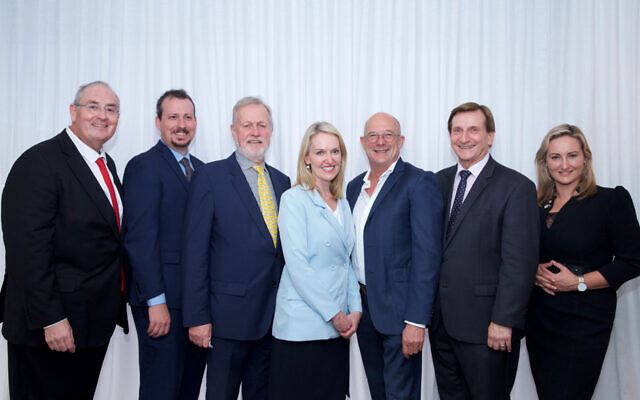 EIGHT NSW politicians have returned from the first “MPs Study Tour” of Israel and the West Bank conducted by the NSW Jewish Board of Deputies (JBOD) in more than five years feeling deeply moved, inspired and empowered by their experiences.

Several became very emotional while sharing their highlights from the intensive six-day tour in January – led by JBOD CEO Vic Alhadeff – at a well-attended “reporting back” seminar at the Sydney Jewish Museum last week.

Liberal MLC and chair of NSW Parliamentary Friends of Israel, Natalie Ward, described the tour as “life-changing” from day one, when the group visited the Western Wall.

“When I put my hand on the Kotel and felt all the hopes, the prayers and the history, I felt an overwhelming energy and tears just came – I’m a pretty tough politician, but I was completely overcome,” Ward said.

She spoke of the heartbreaking moment at Yad Vashem when she viewed a profile photo taken by the Nazis at a concentration camp of a 14-year-old Jewish prisoner who had a cut lip due to being struck on her face for not turning side-on.

“As a mother of a 14-year-old daughter, seeing that photo has occupied my thoughts since.

“My colleagues and I will call out antisemitism from [our positions in] Parliament – we are united as one about that.”

Ward added the group also gained a lot from being able to speak to Israelis and Palestinians throughout the tour, including a Sderot resident who discussed what living under the daily threat of rocket fire from Gaza is like.

“To an Australian who has the luxury of living in a peaceful environment, it is unimaginable that every single bus stop we saw in Sderot was also a bomb shelter.”

NSW Shooters and Fishers Party leader Robert Borsak and his party’s treasurer and fellow MLC Mark Banasiak – as well as NSW shadow treasurer and deputy chair of the NSW Parliamentary Friends of Israel Walt Secord – all revealed how family connections also made their visit to Yad Vashem “moving beyond words”.

Borsak’s father was a Polish Holocaust survivor who escaped into the forest during a death march, Banasiak’s grandparents were Holocaust survivors, and Secord’s partner, Julia Levetina – who accompanied him on the tour – is a member of Emanuel Synagogue.

“When we visited Yad Vashem, there was absolute horror on her [Julia’s] face when she happened to see a series of panels of ravine massacres in the Ukraine … the panels were actual photographs of her mother’s family district that had a documented Jewish presence since 1458,” Secord said.

“Study trips like these are so worthwhile because they remind non-Jews about the need for a safe and secure Jewish homeland – as history and antisemitism repeat.”