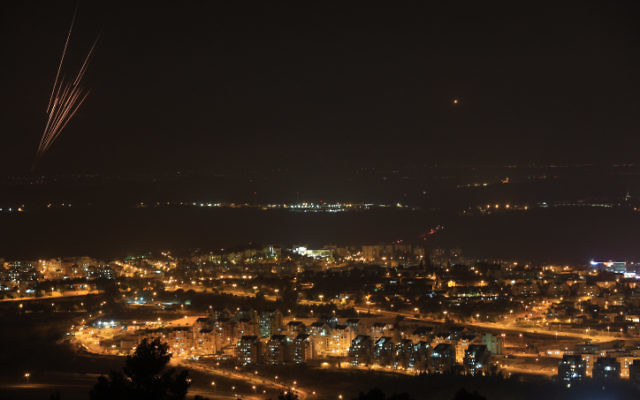 The sirens were heard in Netanya, Kfar Saba, Raanana and areas around Tel Aviv including  Rishon Lezion, Bat Yam, Holon and Bnei Brak at approximately 10 p.m. Tuesday, as well as in communities across the south. They also were heard in northern Israel in Binyamina.

A rocket was intercepted over Tel Aviv by the Iron Dome missile-defense system during the barrage.

The Israeli military confirmed that one rocket hit Jerusalem but did not say where. No injuries were reported.

Before the countrywide barrage of rockets, Israeli Prime Minister Benjamin Netanyahu said in a statement, “We will do all that is necessary in order to restore quiet to the area. The peace and security of our citizens and children is most important.”

Netanyahu said has ordered a “significant expansion” of the IDF operation against Hamas and other terrorist organizations in Gaza.

Netanyahu called on citizens to obey the instructions of the Home Front Command. He urged Israelis to be patient, saying that the operation “can take some time.”

“We must stand together as one,” Netanyahu said, “united and confident in our rightness. We will act decisively and forcefully to restore calm, and will continue to operate until the calm returns, and our citizens and our children can live safely. ”

The White House on Tuesday evening condemned the rocket attacks against Israel.

“We strongly condemn the continuing rocket fire inside of Israel and the deliberate targeting of civilians by terrorist organizations in Gaza,” White House spokesman Josh Earnest told reporters. “No country can accept rocket fire aimed at civilians and we support Israel’s right to defend itself against these vicious attacks.”