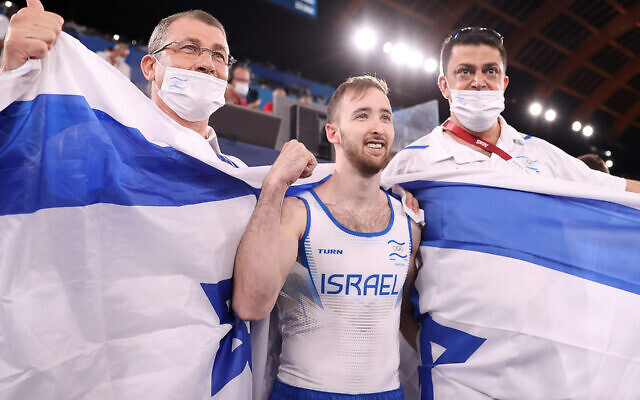 Dolgopyat, a 24-year-old two-time world championship silver medalist who immigrated to Israel from Ukraine at the age of 12, was considered Israel’s best hope for a gold medal at this year’s games.

His final round routine Sunday impressed judges, scoring him 14.933, giving him a total ahead of Spain’s Rayderley Miguel Zapata, who took silver and China’s Xiao Ruoteng, who won the bronze medal.

The gold medal is only the second in Israeli history, following windsurfer Gal Friedman’s 2004 win in Athens.

Israel’s national anthem, Hatikva, rang out as the Israeli gymnast accepted his medal to huge applause.

He said the gymnast brought “immense pride and excitement to all of Israel.”

Bennett interrupted a cabinet meeting to call Dolgopyat in Tokyo and congratulate him, as fellow ministers applauded.

Speaking to reporters after the medal ceremony, Dolgopyat said he was “speechless.”

“I’m still in the sky and it’s hard to come down,” he said, thanking supporters in Israel and saying, “I love you all.”

“I didn’t do my best routine… and I was worried it wouldn’t be enough for a medal… but everyone else was nervous and made mistakes and it was enough,” he said of his winning routine.