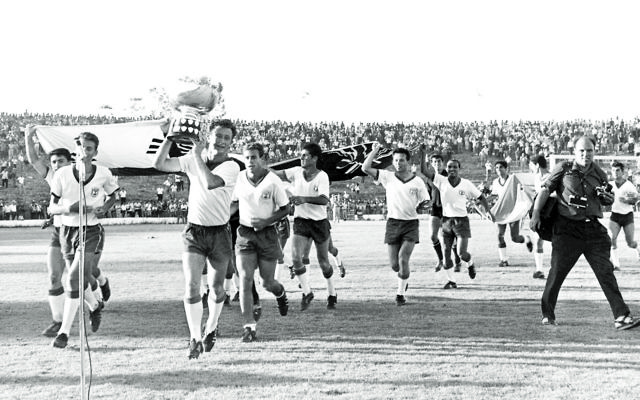 An official Asian Football Confederation (AFC) video (below) showcasing the past winners of the Asian Cup has wiped Israel from the pages of the tournament’s history.

The video, History of the AFC Asian Cup: 1956-2011, which is on the AFC’s official YouTube channel and was shown at the opening ceremony of the tournament in Melbourne last week, shows 14 of the 15 previous winners, with only Israel missing out.

Israel won the cup in 1964, the same year that it hosted the tournament.

A spokesman for the AFC said he will investigate the video’s content.

“Israel’s history in the Asian Cup is still available in all our communications material including the Asian Cup Data Handbook, the website, collateral, etc,” the spokesman told The AJN.

“The video is something that we will look into.”

“The complete absence of any reference to Israel is highly conspicuous in a film showing extensive footage of every Asian Cup tournament since its inception, except for the 1964 tournament hosted and won by Israel,” Ryvchin told The AJN.

“We expect that the world game, which should unite and inspire, has not been sullied by an act of politically motivated revisionism. We eagerly await the explanation of the AFC, and fully expect that as a member of the AFC and FIFA, the Football Federation of Australia (FFA) will raise this issue with AFC president Shaikh Salman if a satisfactory explanation is not forthcoming.”

A FIFA employee, who works in the organisation’s public relations department but asked not to be named, said he was disappointed when The AJN brought the video to his attention.

“Considering the fact that a lot of the sponsors, countries and people bringing the money are from areas that do not recognise Israel, it’s upsetting but I’m not surprised,” the person said.

“I don’t think this would happen at UEFA (the European Football Association) competitions, but in the Asian region there are a lot of countries that do not like Israel.”

Have you  wondered why Israel isn’t competing in the Asian Cup? Click here