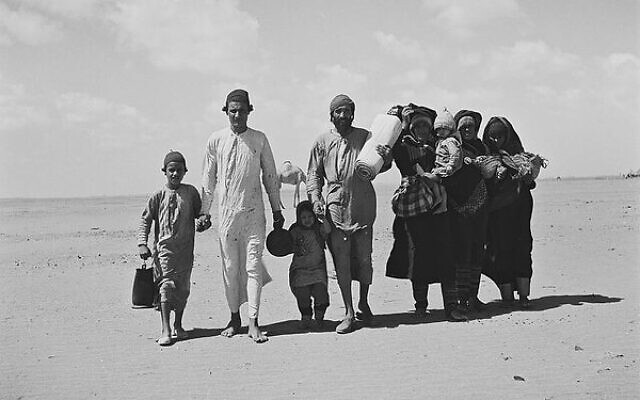 Yemenite Jews near Aden on their way to Israel.

The Abraham Accords have opened up new trade markets for Israeli enterprises as well as cultural exchanges between the people of Israel and their Arab neighbours.

It is especially significant to reflect on Israel’s place in the region this week. Abraham Accords nations such as Bahrain and Morocco – along with many other countries in the region – had many Jews living in their territories after the expulsion of the Jewish people from ancient Israel.

These former Jews from Arab lands and Iran now live in Israel and share a cultural history. Now, these descendants will be a driving force for trade in the region. No longer is Israel an island surrounded by hostile neighbours.

On November 30 we commemorated the expulsion of Jews from Arab lands and Iran. For some involved, the terror inflicted on the Jews – forcing them to flee these North African and Middle-Eastern countries – was extreme. We need to acknowledge this here in the Diaspora; their hardship should not be forgotten, especially now with the rise of anti-Israel sentiment and antisemitism, and the arguments against a Jewish State in Israel.

For over 2500 years, Jews lived continuously in North Africa, the Middle East and the Gulf region. The first Jews settled in those areas at least 1000 years before the advent of Islam. Throughout the generations, Jews in the region were often subjected to various forms of discrimination – and in many cases, ranked lower on the status of society than their Muslim compatriots – but they were nevertheless loyal citizens who contributed significantly to the culture and development of their respective countries.

In the 20th century, with the rise of Arab nationalism and the conflict in Palestine, the new Arab regimes began a campaign of massive violations of the rights of their Jewish citizens.

…The past two years have brought about a new horizon of hope regarding this complicated relationship between Jews and Arab countries. A new era of reconciliation appears to beckon between the Jewish State and its neighbours…

Despite the positive influence that Jews brought to the places where they lived, more than 850,000 Jews were forced to leave their homes in Egypt, Lebanon, Syria, Iraq, Yemen, Libya, Morocco, and several other Arab countries, as Arab states expropriated the property of their native Jews and denaturalised, expelled, arrested, tortured and murdered many of them.

Another major forced migration took place from Iran in 1979-80, following the Iranian Revolution, adding 70,000 more Jewish refugees to this number.

Nowadays, it is estimated that only around 15,000 Jews remain in these lands.

The narratives of the departure of the 850,000 Jews from Arab lands and Iran differ in detail by country and from one family to another, but in the substance the stories are similar.

This mass expulsion and exodus is a part of modern history, but inexplicably, it’s neither taught at mainstream schools nor remembered within the context of the conflicts in the Middle East.

On June 23, 2014, the Knesset adopted a law that designated November 30 as an annual national day of commemoration for these Jews.

“It is not for nothing that this day is marked on the day after the 29th of November,” prime minister Benjamin Netanyahu said at the time. “The Arab countries, which never accepted the UN declaration on the establishment of a Jewish state, compelled the Jews living in their territories to leave their homes while leaving their assets behind. In several instances, the deportations were accompanied by pogroms and violence against Jews. We have acted – and will continue to act – so that they and their claims are not forgotten.”

I found myself writing this article as a proud Ashkenazi Jew in Australia, working for the Israeli government advocating for Israeli companies, day in, day out, regardless of their race, religion, creed or ethnicity.

In my role at the Israel Trade and Economic Commission, I have worked with over 200 Israeli start-ups, scale-ups, established companies, and listed companies. What strikes me is the diversity of the surnames from Israel and how open everyone is when discussing from where their ancestors hail.

I spoke recently with one Israeli company, in particular, that does web accessibility solutions. The two co-founders are Menashe Shani and Shlomi Shushan. These are Mizrahi names; one is from Tunisia and the other from Morocco.

Shlomi and Menashe don’t feel any different from any other Israeli founders. They are out on a mission to commercialise their technological idea for social betterment. A very Israeli endeavour.

In spite of the history, events in the past two years have brought about a new horizon of hope regarding this complicated relationship between Jews and Arab countries. A new era of reconciliation appears to beckon between the Jewish State and its neighbours.

May this new era herald real peace. But at the same time, it is imperative that the story of the Jews from Arab lands and Iran not be forgotten, and that the citizens of those countries learn what happened in the lands where they live.

In order to avoid history repeating itself, it is of utmost importance that we strive to learn and understand the past.

Jeremy Ungar is the senior trade officer at the Israel Trade and Economic Commission, and a member of the Executive Council of Australian Jewry’s Jewish Advocacy & Leadership Corps.