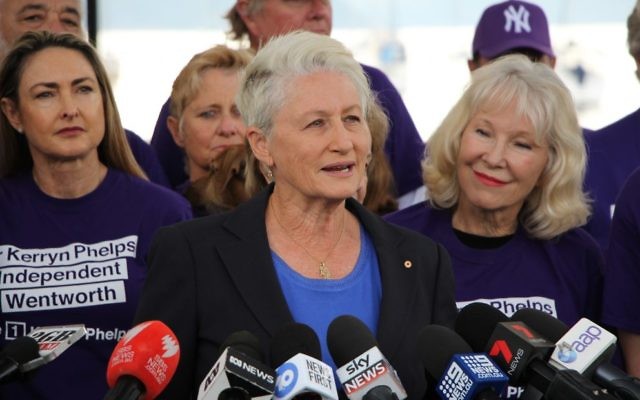 WE attended a family bar mitzvah on Saturday at Emanuel Synagogue. One of the themes Rabbi Kamins spoke about was the concept of mitzvah and obligation to community.

You may well have wondered why, as a doctor with an already busy life, I would have gone to the trouble of running for federal Parliament at the October 2018 by-election. For me, it was always about obligation to community.

For some time, I had become increasingly concerned about the direction our country was heading.

The Parliament was being controlled by right-wing climate change denialists and fossil fuel interests, and in the view of experts, failing to prepare our country for the transition to a clean energy future to protect our children and grandchildren.

After two decades of fighting for marriage equality, we were being exposed to destructive debates about “safe schools” and “gender whisperers”. It became apparent that the government would pursue so-called “religious freedoms” which would seek to introduce more discrimination targeting the LGBTQI community.

Australia was gaining a bad international reputation for our cruel treatment of people seeking asylum.

There were increasing attacks on the ABC, along with concentrated media ownership pushing a biased political agenda.

Then there was the instability of political leadership. When Malcolm Turnbull was deposed as prime minister and then resigned as member for Wentworth, I was encouraged to nominate. This was not an easy decision. My family and I discussed it, and decided it was time to step up. I am reminded of my brother-in-law Phillip Stricker’s favourite saying: “Don’t give me a lighter load, give me a stronger back.”

I promised to represent the “sensible centre”, to provide an antidote to the extremes of the left and the right of Australian politics, and to speak up for the issues my community was telling me needed a voice.

On October 10, 2018 I was elected, the first Jewish woman to be elected to the Australian Parliament.

I had set an ambitious agenda and we hit the ground running.

Community campaigns by #KidsOffNauru, #6000doctors and others kicked into gear. I promised to do all I could to get the kids off Nauru. That happened.

As a doctor, I was deeply disturbed by the humanitarian crisis on Manus Island and Nauru. Seriously ill people who had been found to be genuine refugees were being dragged through the court system before they could receive appropriate care. I promised to do all I could to find a solution.

I my first few weeks in Parliament my team and I worked with refugee advocates and lawyers, negotiated with Labor and the other crossbenchers and found a solution which came to be known as the Medevac Bill. The bill made sure that doctors’ recommendations for medical transfers would be followed, with appropriate security safeguards.

The legislation became law on March 1, 2019, following a historic vote in the House of Representatives.

I promised to make sure the environment, climate change and the future of energy production was firmly on the agenda.

I envisaged a culture of inclusive community consultation with a series of open forums at Woollahra Library with experts on the economy, superannuation, climate change and energy policy, women’s issues, youth issues and the future of the arts.

We developed a series we called “Politics in the Pub” to encourage conversations about policy and the future of our country.

We established a committee including Miriam Guttman-Jones and the inspirational Bondi Public School principal Michael Jones to assess a range of Stronger Communities Grant applications, and I had the opportunity to visit many of the amazing projects we helped to fund around the electorate such as Our Big Kitchen and Jewish House in Bondi, a women and children’s refuge in Randwick and the Men’s Shed in Waverley. We learnt about the project to establish native bee colonies in gardens throughout Wentworth and funded rescue boards for teenage nippers at Tamarama Surf Club.

I appreciated the many invitations to schools in the area to conduct Q&A sessions with students interested in Australian politics.

In my seven months as an MP, I delivered on my promises.

My team and I were determined to continue with the positive, honest approach that characterised our by-election campaign in October 2018. We shared a passionate commitment to integrity in government, protecting the environment, social justice, health and education.

On the night of polling day, we were ahead in the count. The following day it was evident that the postal votes would turn the result against us. We went close, closer than many predicted we could, but it was not to be.

It has been a great privilege to represent the people of Wentworth, and I hope that my continuing legacy will be a change in the political discourse to a mature, inclusive and evidence-based debate about the Australia of the future.

Dr Kerryn Phelps is the outgoing Member for Wentworth.