You spoke to Israeli PM Naftali Bennett overnight. What did you discuss?

Naftali reached out, he wanted first of all to say ‘thank you’ to Australia and my government for the position we’ve taken on Hamas, and Hezbollah prior to that. I met with Naftali when I was in Glasgow last year and he renewed his invitation for me and Jenny to come [to Israel], which we’d love to do obviously. I’ve been looking to come to Israel for some time now, but events in Australia have kept me here, but it was very nice of him to repeat that invitation. And I extended the same invitation to have him here in Australia.

Other than the United States, Israel has no greater friend [than Australia] anywhere in the world. We will be always consistent about that. And he’s very appreciative of that and the very strong position we’ve always taken, [for example] in the UN, where I’ve ensured that Australia’s position has been fully reversed and moving from abstain to reject on those usual motions that are put up every year.

And that hasn’t gone unnoticed over time. I remember once at the UN some years ago, one of the marks of respect that is made by various missions to the UN is who comes along to your nation’s address and there was a full contingent there from Israel, which I greatly appreciated, because the relationship goes back a long way, well before I ever entered politics. I’ve never had an each-way bet on Israel.

One of the other areas that Naftali and I often talked about – we didn’t get the chance last night, but have on other occasions – is the technology partnerships, both on energy, on water and a range of other advanced financial technologies. This is an area where we see great cooperation. So, it’s not a one-dimensional relationship about security. It’s a multi-dimensional relationship where we have a lot to learn and a lot to gain.

We also spoke about Ukraine yesterday as you’d expect as topic of conversation with all that is at the moment, and we’ll stay in close contact on those issues with Israel.

Many in the community wonder why it took so long to list Hamas and Hezbollah in their entireties as terror organisations?

We don’t do these things lightly. These have been under consideration for some time and we’ve been working through a whole range of issues. Events change also over time, and advice changes as well. But we have been consistently putting the question back into our system about this, and I’m really pleased that we’ve been able to get to that point.

Other than the United States, Israel has no greater friend [than Australia] anywhere in the world.

It’s one thing to say you support something after it’s been done, that’s the easy part of taking a strong stand on these issues. It’s another thing to be the one who does it. And that’s always the case with our government. We’re the ones who step up when it comes to national security issues, certainly on Israel, and the positions we take. We’re the ones who take the initiative.

But I think what the Jewish community in Australia has known about my government has been that it’s been consistent, it’s been strong, and it’s always moving forward. And we have a very good relationship with Israel in that when we have discussions about things, we have them as friends, we have them as supporters, we have them as fellow travellers in what’s trying to be achieved. 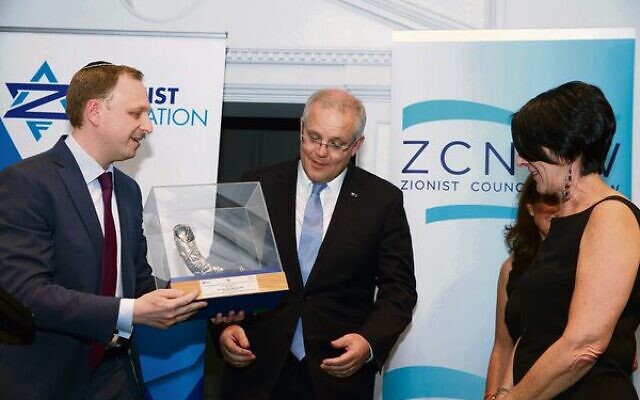 Speaking of that relationship, have you had a chance to speak with the new ambassador Amir Maimon?

Not yet. I actually don’t get too many opportunities to talk to ambassadors at official events and gatherings, but given the number of events that I go to in the Jewish community, when those opportunities present – I’m sure that won’t be very far away – I’ve always enjoyed that.

One of the most enjoyable occasions I’ve had speaking was at the United Israel Appeal last year. I was very appreciative of the warm reception I received, because it went not just to what I was saying that night, but [that] they more than anyone understand the positions that I’ve taken on a number of these issues – which is frankly the reverse position of my predecessors, even on my own side of politics – they’re very appreciative of that.

One of the things I’ve always really admired about the Jewish community is that they know who their real friends are.

What would you say to those who claim that banning Hamas in its entirety is counter-productive to pursuing peace?

I’d say that Hamas is a terrorist organisation. That’s my obvious response. There are lines you don’t cross, and we’re facing that in Ukraine at the moment. Are threats of violence and intimidation acceptable in order to extract some advantage or negotiating position? No, they’re not. There are some absolutes. And if you’re a terrorist organisation, we’ll have no truck with that. Full stop.

And I think having that position is very important in the international community at the moment. There are some things you can’t compromise on. If you start going down that path of appeasement to violence and intimidation and threats, where does that end?

And we’re facing a lot of those challenges in this country at the moment. And that’s one of the reasons why I’m really pleased to have [Wentworth MP] Dave Sharma on my team, because Dave understands these issues. You’d be hard pressed to find someone who better understands Israel in our parliament. And not just being supportive and sympathetic, I mean understanding the complexities of the international issues and and being able to work through them. So that is a comprehensive position that Dave has. 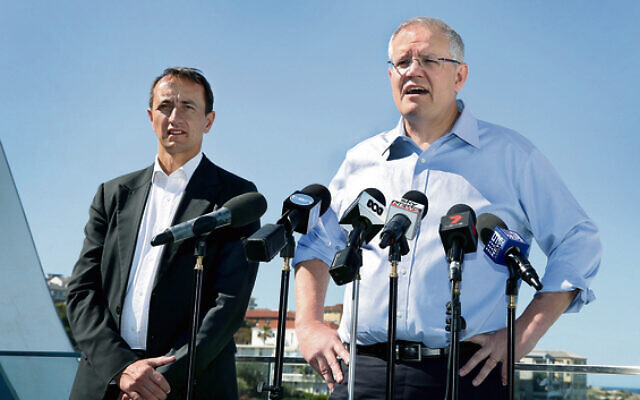 Moving on to the Amnesty International report, you obviously had some comments when it was first released. Could you elaborate?

There is a constant fresh press upon Israel and it comes from every single angle. What I’ve always sought to do is stand with Israel, to ensure that this sort of move to cancel it in so many ways is resisted. No state is perfect. Australia is not perfect, and neither is Israel, and the thing I love about Israel, they’re the first to admit that. Their democracy is that robust, and that the self-criticism is strong and it’s such a vibrant, passionate place. And it’s a beacon in that part of the world. That’s why I think when those tools are being used to try and denigrate Israel in that way, coming from that angle, I call it out. And that’s what I’ll continue to do. Our position is very clear and the Jewish community can always be confident that it will remain along that track.

Just on that, Queensland Liberal National MP Ken O’Dowd actually agreed with that report. Did you want to comment on his view?

I don’t agree with Ken. That’s not the government’s position. And Ken is actually not contesting the next election. People can have different views, but I think when you compare that to what Senator Lines said, the contrast is very clear.

But on top of that, when you really look at the difference between us and our opponents, I mean, the sort of things that Tanya Plibersek has said continue to stand out there, effectively implying that Israel was a rogue state and calling Ariel Sharon a war criminal, and that’s been now repeated in terms of claims of crimes and in terms of apartheid by Senator Lines. And I think Bob Carr used to be on the Friends of Israel. I would say be careful of fake friends. I’m not sure what [Opposition Leader] Anthony’s [Albanese] view is on all this. I know the faction he comes from in the Labor Party, I know what they think, but the best I could describe his position is being opaque. 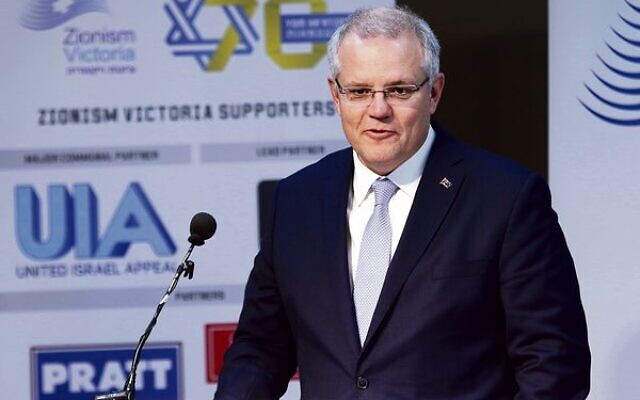 The religious discrimination bill is on ice at the moment. Where does that stand now? Are you going to try and get something before the election or wait till after? What’s the future for that bill?

I was hoping to see that achieved as well. And frankly, would have liked it to go a lot further than it actually did. We sought to get that outcome but the spirit of compromise was not shared. And my concern is that the good faith intention to bring forward that bill was hijacked, principally by Labour and others, to turn into a bill about something completely different.

And I won’t allow any moves for religious discrimination bills to be used as a Trojan horse by others who just want to roll back a whole range of other protections for religious faith in this country.

This is a complex space, we engaged in this in good faith. I didn’t engage in any politics on this issue whatsoever. I sought to get agreement with, I think, some reasonable concessions. But at the end of the day, that spirit of compromise in order to gain these these advantages was was not shared by the Labor Party, and ultimately was used by them as a Trojan horse to roll back protections for people of religious faith in this country.

People of religious faith in this country can always be assured that when it comes to the calls that I have to make to protect religion and religious faith in this country, I will do that even if that means that sometimes I have to lay down things that I would like to see happen if I believe the greater risk is proceeding with the rollback on many other issues that I don’t support and don’t agree with.

The Treasurer has been spearheading Holocaust education and the rollout of Holocaust museums around the country. Just your thoughts on the importance of that?

Sydney Boys High School, as I’ve often joked, was Moriah College before Moriah College and so I almost consider myself a Moriah old boy in that context. But putting that to one side, so you grow up in Sydney or in Melbourne, places like that, I think there is awareness. But what I really love about what Josh is doing, is he’s taking that to so many other parts of the country and ensuring that there’s a national understanding of these issues and national education on this. It’s been a work of passion for Josh. The Jewish community has got a great champion. So we will never forget.

This is why the program exists. My most enduring memory of these issues was as a young boy driving past Temple Emanuel and I asked Dad, why are all these people standing outside? And he explained it to me. That has always stuck with me, and it’s a great shame that we need this in this country.

It’s a great shame that Josh Frydenberg as Treasurer has to have a close personal protection detail. I was treasurer for three years, I didn’t need it at all. He doesn’t have it because he’s the treasurer. He has it because he’s Jewish. And I think that’s just appalling that that is necessary. But this is a fact. And it’s a real fact that people of Jewish faith deal with every single day. And that always breaks my heart that’s the case. So we will always be stepping up doing everything we can, so that young Jewish boys and girls can go to school, they can go to temple, they can come together as community, they can do all those things and enjoy that in the same way that all other Australians can and to be fair, I want people of all religious faiths to be able to do that.