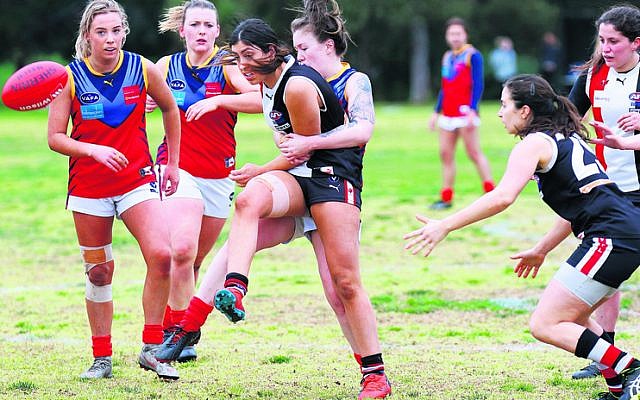 IN the VAFA women’s division 4 pre-season at summer’s end, AJAX footy club was struggling to even have enough players in their squad to field a team for the 2019 season.

But a core of experienced and committed players was there for head coach Joe Nankin, some welcome new recruits successfully trialled at team training sessions and, most importantly, the players demonstrated a sense of self-belief and drive that was second to none.

Now the Jackettes find themselves just one win away from booking their place in the grand final, after securing third place at the end of the regular season, before winning their do-or-die home semi-final last Saturday against Parkdale in a 3.1 (19) to 1.1 (7) battle of endurance.

Their success might have surprised some, but not Nankin.

He told The AJN, “These girls have a lot of spirit, and they’ve taught me a few things along the way too.

“They even developed their own motto – GVO (Good vibes only) – to deal with the situation they were facing.

“It’s all about the idea of staying positive no matter what. They live by that, and they’re such a close-knit, supportive group – that’s been the key all season.”

Against Parkdale last Saturday, the defence was willing by both teams in a very physical first two quarters of footy, where goals were as rare as hen’s teeth.

Down by one goal at half-time, Nankin made a few positional changes to rattle their opponents, including moving Lindi Nankin higher up within the forward pocket.

It worked a treat, with Jessie Israel taking a classy mark from a well-directed Nankin kick about 25 metres out from Parkdale’s posts, before calmly slotting in a goal.

Parkdale had no answers for a pumped up Maddy Smart, who kicked her 17th goal of the season – the most by any player in the competition – before Isabelle Worth sealed the win with a goal deep into the fourth quarter.

“Jesse Israel was pivotal for us, Justine Gabriel put up her hand the whole game to stop one of Parkdale’s best forwards, and the whole team did its job,” Nankin said.

“The players certainly sang the team song after the game with much gusto.”

AJAX goes into this Sunday’s preliminary final against Richmond Central with one of the best defensive records in the competition, as well as boasting three of the top five highest goal scorers in division 4 among its ranks.

“Our attack starts with our defence, and that is very solid – a lot of teams find it hard to score against us,” Nankin said.

“We’ve had one win and one loss against Richmond this season, but we were missing some key troops when they beat us, so we’ll go into the game with confidence.

“Anything can happen on the day.”