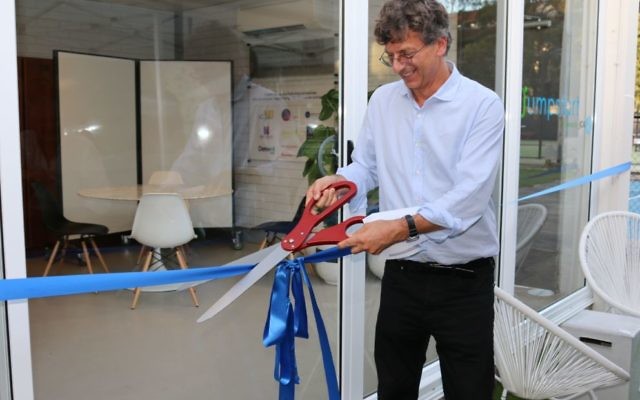 MEMBERS of The Giving Forum, JCA major donors, the Jumpstart committee and members of the Sydney Jewish community gathered at White City on Thursday night to raise a glass to the newly opened Jumpstart Innovation Hub.

“It’s going to be great to have a space for Jewish entrepreneurs and innovators to come together, to work together, to share ideas and be in a place where they can be inspired,” co-chair of the Jumpstart committee Jonathan Gavshon told The AJN.

The Innovation Hub was conceived and developed by Jumpstart, a new JCA initiative set out to engage the next generation. The purpose of the space is to inspire, foster and support Jewish entrepreneurship and to connect young adults to JCA in new and meaningful ways.

With desks, free all-day parking and full kitchen facilities as well as access to mentors, skills-building sessions and networking opportunities, it’s no surprise that six of the 18 desks have already been rented. Jumpstart committee member Jonathan Barouch said at the launch that it took “two years of blood, sweat and tears” to make the Innovation Hub a reality.

“We have created a shared workspace for members of the Jewish community,” said Jumpstart project manager Gina Cohen. “It’s a great central location, close to Edgecliff train station and there’s a great buzz and atmosphere in the surrounding area. It will also be a part of the wider Maccabi community.”

The Innovation Hub has been specifically designed to encourage strong internal and external collaboration between new and experienced entrepreneurs, and was funded by members of The Giving Forum.

Established in December 2015 by a group of major donors and their families, the mission of The Giving Forum is to inspire innovative philanthropy on a large scale and provide an enduring funding platform to guarantee the local Jewish community’s financial security and growth over the next century.

Chair of The Giving Forum steering committee Greg Shand said that the group “recognised that the way we do things in our community needs to change with time, which is particularly the case with how we engage with young people”.

Under construction since November 2016, the hub is now fully furnished, and officially opened its doors on Monday morning to young Jewish entrepreneurs in need of a co-working space.