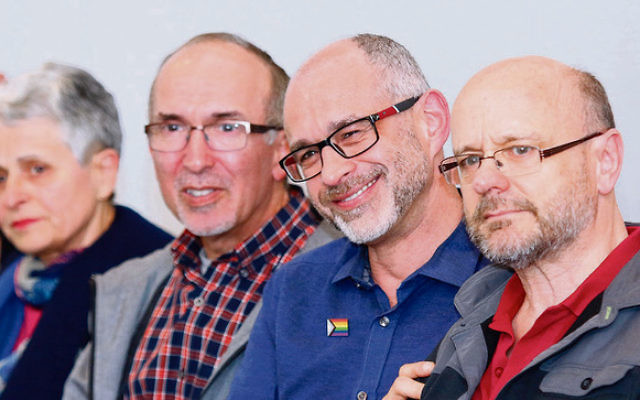 HISTORY was made at the Jewish Community Council of Victoria (JCCV) on Monday night when its plenum voted to apologise unconditionally to LGBTIQ+ advocacy and support group Aleph Melbourne for painful events that occurred 20 years ago.

In May 1999, the JCCV plenum rejected 46-39 with three abstentions a motion from its executive to admit Aleph as a JCCV member organisation. But two decades later, a motion by the executive to apologise was overwhelmingly adopted.

The motion stated, “This plenum now apologises unconditionally to all members of our community who were impacted by the rejection of the Aleph Melbourne membership application and for the unacceptable homophobic views expressed during the debate.

“We recommit ourselves to welcoming and embracing LGBTIQ+ Jews in all our work, as part of our broader commitment to social inclusion for all members of the Jewish community in Victoria. Through our genuine commitment to equality and diversity, we seek to ensure that the mistakes of the past will not be repeated.”

Monday’s motion followed some controversy at the JCCV’s March plenum when a similar motion, put by Australian Jewish Democratic Society (AJDS) delegate Sivan Barak, was not voted on, after some delegates wanted modified wording, including removal of references to a “decade of inaction” by the JCCV on gay rights after the 1999 rejection of Aleph. Following the March plenum, a meeting of Aleph, AJDS and JCCV executive member for social inclusion Doron Abramovici hammered out the revised motion, from which some historic references were deleted but which includes a reference to apologising “unconditionally”.

Proposed by JCCV vice-president Anton Hermann and seconded by Barak, Monday’s motion was challenged by Mizrachi Organisation, which wanted “hateful” replaced by “harmful”, but the amendment was not supported.

The motion was then put to the vote and was accepted on a show of hands, with only two abstentions.

Michael Barnett, convenor of Aleph, told The AJN afterwards he was elated by the historic act of contrition, which he believes is the first time a Jewish community roof body anywhere in the world has issued a formal apology for past actions over its relations with a Jewish LGBTIQ+ organisation and “sets a standard that the entire Jewish community around the world, and others, can look to”.

“On a personal level, this apology means a lot to me, it means a lot to the members of Aleph Melbourne and I’m sure it will mean a lot to many people in the Jewish community who are either same-sex attracted, transgender-diverse or intersex, or their families,” he said, noting the “sincere and genuine way” in which it was ultimately achieved.

Barnett said that although Aleph is part of the JCCV’s LGBTIQ+ reference group, there are no immediate plans to reapply for JCCV affiliation, as the required membership numbers were severely depleted by the 1999 rejection and have not recovered.