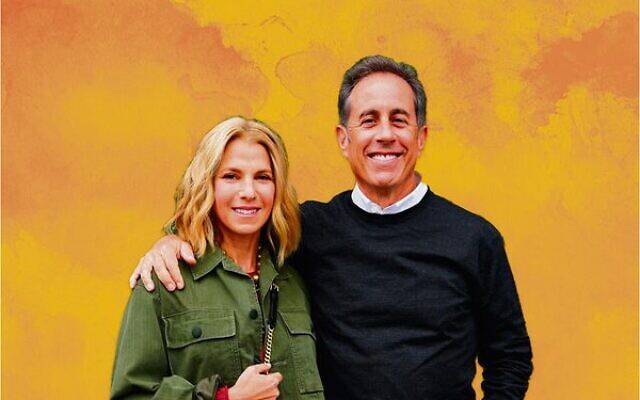 “I support my Jewish friends and Jewish people,” it read, in blue letters on a black background. “If you don’t know what to say, start by saying this on your feed,” Seinfeld captioned the post, shared by many celebrities.

In an interview with The Today Show promoting his new book The Comedians in Cars Getting Coffee Book, Jerry Seinfeld, 68, publicly praised his wife’s Instagram post.

Sitting at the 2nd Avenue Deli and noshing on some Jewish staples like pickles and coleslaw (“Is it Jewish enough for you?” Seinfeld asked), host Jenna Bush praised Jessica’s popular post and asked the comedian and father of three what he thought about the recent rise in antisemitism.

While the comedian, who is known for not wanting to mix politics and comedy, didn’t directly respond to the question, he did have a lot of praise for his wife of over 30 years.

“She found a simple, and I thought non-aggressive, way to say something that, as we said, unfortunately needs to be said – but does need to be said,” he told Bush.

“I thought that was a very special and fantastic thing to do.” He added that finding a non-inflammatory way to touch on the subject is “hard to do, right?”

“Most things in that venue is going to trigger someone, it’s going to inflame. We are so quick to inflame, right? Both sides of any debate. Women, gender, everything, right? This is the culture we live in. Flash paper. Instant, violent verbiage, right?” Seinfeld said.

“And she found a way to sort of quiet it,” Bush added. “And hopefully raise awareness.”

Jessica Seinfeld’s post did give us a way to feel a sense of solidarity, and she helped, in her own way, to change this moment of antisemitism in the country into an opportunity to talk about the problem of antisemitism, especially among non-Jews and celebrities.

After her post was shared far and wide, the mother of three wrote that the “amazing response” to her post “gives me hope”.

“Hateful words turn to hateful violence. Reinforcing that message on your own platform, big or small, means everything, and it’s already making a difference,” she wrote.