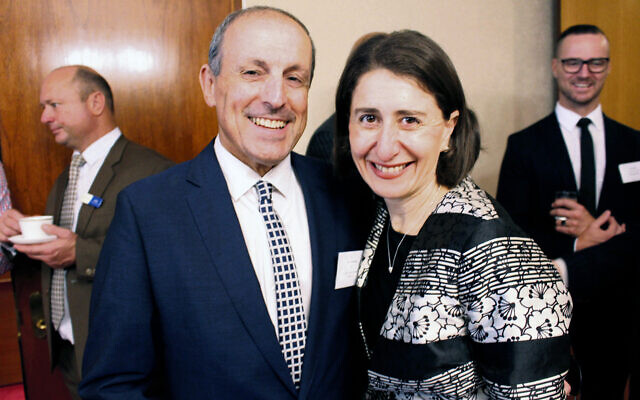 The AGM was to have been held at NSW Parliament House. However as with JBOD’s recent plenums, due to COVID-19 it will now be held online.

“Premier Berejiklian has proven to be a staunch friend of the community,” JBOD president Lesli Berger said.

“Her government generously granted $2 million for communal security, she was instrumental in the introduction of legislation outlawing incitement to racist violence and she presides over one of the most successful multicultural societies in the world.

“We look forward to hearing what she has to say and I encourage members of the community to avail themselves of this opportunity by Zooming in.”

Dr Mike Kelly, the former Member for Eden-Monaro who recently retired from parliamentary life, will also address the meeting.

Dr Kelly, a steadfast friend of the Jewish community from within the Labor Party, resigned from politics earlier this year due to health complications developed during his 20-year service in the Australian Army.

Meanwhile, the AGM will also serve to induct JBOD’s new executive and committees, with members being put forward unopposed after agreements were reached following the recent controversial deputies election.

“This is a significant win for common sense and unity of purpose for the board and the Jewish community which it serves.

“I’m delighted that we have harnessed the considerable skills and experience both of the recently elected deputies and of incumbent deputies, to produce a balanced, representative and energised team to guide the board in the challenging times which face our community,” Berger said.

He said that challenges including an alarming rise in antisemitism and the threat of a second wave of COVID-19 “require us to come together and to recommit to our wonderful community in a united and invigorated way”.

“The new executive has a shared focus and I very much look forward to working with them. We will all devote our energies to continuing to supercharge the work of the board to serve the community,” he added.

Making up the rest of the executive are Ed Feiner, Eitan Neishlos, Eric Roozendaal, Julia Sussman and Yosi Tal.