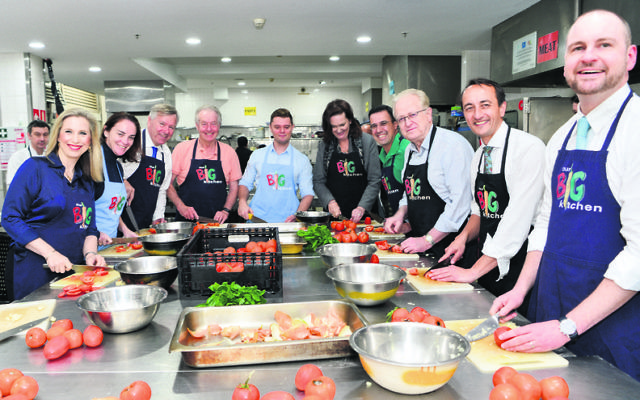 JEWISH candidate Richard Shields has thrown his hat into the ring for Liberal preselection in Wentworth, which is to be decided tonight (Thursday).

At the same time, frontrunner Andrew Bragg has withdrawn from the contest, citing the need for a female candidate to be preselected in the seat.

It followed polling paid for by Bragg which showed a female candidate could boost the party’s vote by four per cent.

A by-election for the electorate will be held in October, with polls suggesting it will be the closest race in years.

The various candidates vying to represent Liberal all baked challahs at Our Big Kitchen last Friday.
Shields, a Woollahra councillor who lives in Double Bay with his wife Shoshana and three children, confirmed last week that he is in the running.

Shields attended the University of NSW where he was the president of the Liberal Club and on the AUJS executive.

During a 25-year association with the Liberal Party, he has worked for former Wentworth MP Andrew Thomson, former Minister for Communications Senator Helen Coonan and as an adviser to the Howard Government.

He was identified as a future political star by The AJN in July 1998, in a profile alongside an up-and-coming Eric Roozendaal, who went on to be NSW Treasurer.

Whoever wins the Liberal preselection will face a tough campaign against Labor’s Tim Murray and potentially Jewish Independent Kerryn Phelps, who has yet to announce her candidacy.

Murray is an economist who spent two decades building an investment firm in China. He now lives in Tamarama with his wife and three young children.

He told The AJN, “It is rare for a politician to have the affection and respect that Malcolm Turnbull has in the Jewish community, and after all the turmoil of the past weeks, politicians need to really be listening to their electorates.

“I am looking forward to introducing myself to the Jewish community in the coming weeks, and having a conversation about what we all need to do to fix our broken politics, and ensure Australia embraces the enormous opportunities we have.”

Murray has the backing of Turnbull’s son Alex, who has taken to social media to endorse him.