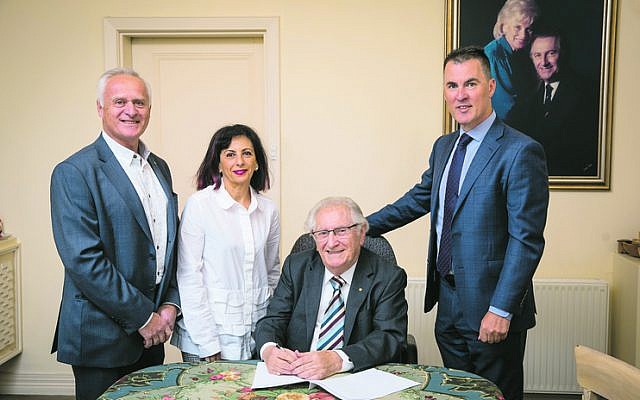 JEWISH Care Victoria this week received what is believed to be the equal-largest donation in the history of the Victorian Jewish community.

Charles Holckner has given $5 million as part of the organisation’s “Growing. For our community” capital campaign.

In recognition of the exceptional pledge, Jewish Care will name their St Kilda Road site The Holckner Family Senior Living and Community Precinct, which is also undergoing a two-stage development.

“Jewish Care is a lasting organisation and they do a wonderful job,” Holckner told The AJN.

“I want my children to know who their forebears were. It will be passed on as a family heirloom.”

Stage one of the development will encompass the $90 million Hannah and Daryl Cohen Family building and will comprise seven levels of residential aged care, and two levels of community services. It is set to be completed in early 2020.

Stage two of the precinct is currently in the planning stages, with extensive research being undertaken by Jewish Care to determine the mix of aged care and essential services to support the community into the future.

Holckner’s donation is believed to have been equalled only by that gifted to Jewish Care’s Capital Campaign by the family of Hannah and the late Daryl Cohen in 2016.

“We need to ensure that we look after our Jewish traditions, and take care of those people that need assistance – and that’s why I selected Jewish Care for this donation,” said Holckner, whose parents arrived in Australia in 1927 “with nothing”.

Despite the family’s hardships, Holckner went on to serve as director of the Smorgon Family Group and Smorgon Consolidated Industries, and has since been the director of Encore Tissue and TKG Australia.

He is the chairman of the Holckner Group, and received an OAM in 2017 for service to the community through support for a range of organisations.

“Our success is due to many factors. But now that we have the means, I hope this gift will serve as a benchmark for future generations to follow.”

Jewish Care CEO Bill Appleby said, “We are honoured that the Holckner family have chosen to give such a generous donation to Jewish Care.”

Jewish Care’s $200+ million capital campaign, “Growing. For our community”, was launched in 2014. Believed to be the most extensive capital investment program in the history of Australian Jewry, it will encompass the construction of six major projects in the areas of aged care, disability and community services.