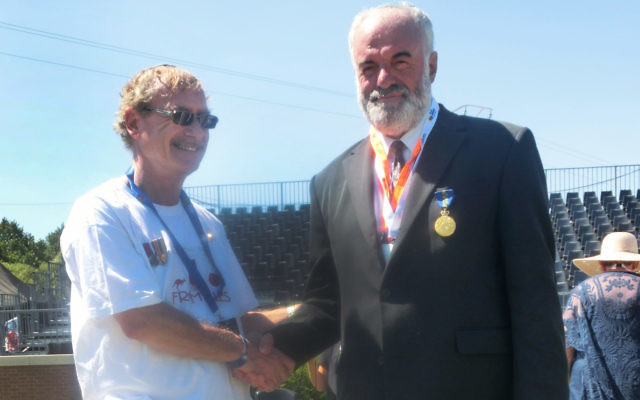 Peter Allen with Lambis Englezos at the ceremony in Fromelles, France on July 19.

MORE than 3000 people stood as one at Pheasant Wood Military Cemetery near Fromelles, France, last week to honour the Diggers who paid the ultimate sacrifice exactly 100 years ago, in a battle often described as “the worst 24 hours in Australian history”.

More than 5500 Australian soldiers became casualties in the disastrous joint Australian-British advance on German trenches – the first battle Australians were involved in on the Western Front. By nightfall on July 20, 1916, almost 2000 Australians were killed in action or died of their wounds. Among the dead were 12 Jewish Diggers.

Representing Australian Jewry at the commemoration were Peter Allen, national coordinator of the Centenary of Anzac Jewish Program (CoAJP), and his wife Gloria, who six years earlier at the same site witnessed the reburial ceremony of 250 Australian and British soldiers discovered in mass graves, 144 of whom had been identified by DNA matching with relatives.

“Their stories were told, and newly inscribed headstones unveiled with family representatives present – that was very moving,” Allen told The AJN. “I felt a greater sense of calm than in 2010 – the cemetery had a more serene feel to it, as if the soldiers had settled in to their new, final resting place.”

While there, Allen visited the grave of Jewish Digger, Lieutenant Berrol Mendelsohn and laid a wreath on behalf of the Jewish community.

He hopes that with further DNA testing Private Lionel Harold Levy – his mother’s cousin – will be identified, as well as Private Joseph de Passe, whom he said “is believed to be the youngest Jewish AIF soldier to die in WWI, being 16 years old”.

Allen also laid a wreath on July 23 at the 100th anniversary commemoration service for the Battle of Pozieres – a six-week campaign which saw the capture of that village and Mouquet from the Germans at a cost of 6800 Australian lives, including 20 Jews.

“The services and the soldiers’ sacrifice in the cause of freedom were particularly poignant in light of the recent tragic terrorism in Nice,” Allen said.

Meanwhile in Sydney last week, the Sydney Jewish Museum signed a contract with UNSW to co-publish a book being written by Jewish author Mark Dapin about the history of Jews in Australia’s military.

The next event on the CoAJP calendar is a service for Tasmanian Jewry on October 30 at Hobart Hebrew Congregation, where a commemorative plaque will be unveiled. Those wishing to attend should contact Peter Allen by August 3 at ccallen@bigpond.net.au.