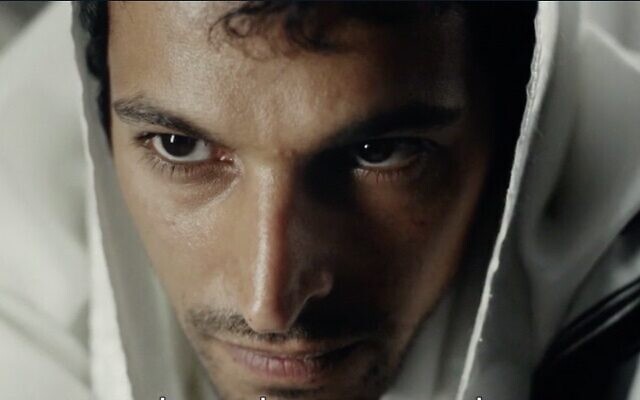 Yehuda Nahari stars as Yigal Amir in the movie Incitement, set around the 1995 assassination of Israeli prime minister Yitzhak Rabin.

EACH year Jewish International Film Festival (JIFF) artistic director Eddie Tamir sees more than 300 films and documentaries to narrow down his selection to about 60 movies to screen at the annual festival in Australia capitol cities in October and November.

Tamir and his wife Lindy, who is JIFF’S executive festival director, managed to attend the 11-day Berlin International Film Festival, which opened on February 20.

“We are fortunate that the Berlin film festival went without a hitch and we saw a lot of films,” said Tamir, adding that they returned home to Melbourne just before countries around the world starting closing their borders to travellers.

Tamir said the atmosphere in Berlin during the film festival was normal, with the only difference to previous years being the absence of Chinese film producers and buyers due to the lockdown already in place in China.

“People were queuing for films and sitting next to each other in cinemas. There were no social distancing regulations or even hand sanitisers in sight,” he said.

“It was basically business as usual in a festival atmosphere, even though it was six minutes before midnight in terms of the world being struck down by the coronavirus.”

The Cannes Film Festival, which was scheduled to be held from May 12-23, has been postponed to July, while Tel Aviv’s international documentary festival Docaviv, scheduled for May 21-30, is expected to be held in September.

As the Tamirs work on JIFF all year round, they have already sourced many films and documentaries for this year’s festival.

“We have more than 30 films that we are excited about that are already locked in,” he said.

“If we need to put on JIFF tomorrow without any further films we could put on a great festival.

“We hope that cinemas will be open by October so that we can get JIFF rolling again.”

On March 23 the Federal Government ordered all cinemas closed as a further step to limit the spread of coronavirus.

“It is quite amazing for us and quite surreal – this is the first time in 23 years at the Classic Elsternwick that we are closed,” said Tamir, who operates the Classic, Lido and Cameo cinemas in Melbourne and the Randwick Ritz in Sydney.

Among the films screening at this year’s JIFF is Persian Letters, which premiered at the Berlin International Film Festival and has been compared to the 1997 Oscar-winning film Life is Beautiful.

Directed by Vadim Perelman, it tells the story of a Belgian Jew who invented a language in order to survive in a concentration camp.

Argentine actor Nahuel Pérez Biscayart plays the prisoner Gilles, a rabbi’s son from Antwerp who falsely claims to be Persian in order to survive a mass shooting and is obliged to teach the camp’s German chef, Klaus Koch, the Farsi language that he only pretends to know.

Also slated for JIFF this year is the drama Incitement, which premiered in Toronto and was recently released in the United States.

Incitement is set around the 1995 assassination of Israeli Prime Minister Yitzhak Rabin at a political rally in Tel Aviv by young radical Yigal Amir.

Yehuda Nahari plays the role of Amir, a smooth-talking law student who believes that any accommodation to the Palestinians in the peace process would be a betrayal of Israel.

As an Israeli army veteran, Amir has military training in weapons and tactics, and arrives at the rally with a semi-automatic gun.

“There are a lot of films that have been completed but have not yet been viewed, and other product that has been curtailed,” said Tamir.

“I’m not sure if some films will be held back from us, but we hope to have an opportunity to see new films via online links and consider them for JIFF.

More than 50 films from JIFF festivals over recent years are now available for cinema lovers to rent or buy to watch in their own homes through on JIFF VOD.