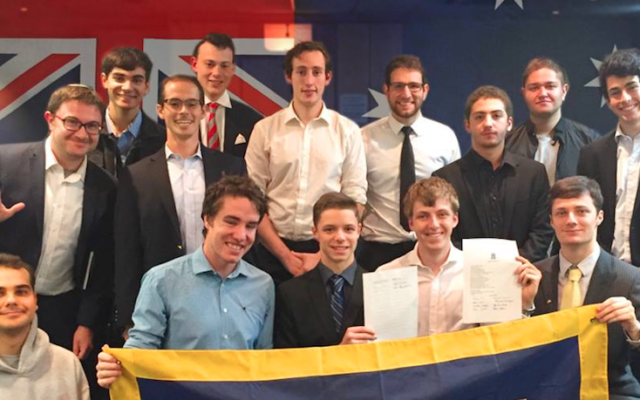 The first members of the Alpha Epsilon Pi Sydney chapter.

IN 1913, a Jewish economics student Charles C. Moskowitz established Alpha Epsilon Pi (AEPi) in the cellar of a sausage shop in New York city, founding the only Jewish fraternity in the US. That fraternity grew from 10 members in 1913 to more than 102,000 worldwide in 2016, and has now expanded to include Sydney.

“It’s a great initiative,” said Sydney AEPi president Ben Ezzes, a former Moriah student. “We are committed to our core purpose, which is developing leadership and identity for the Jewish community.

“We’re just a group of passionate people coming together with a universal goal of trying to do some good in the community. APEi raised over US$300,000 for its beneficiaries so far in 2016. AEPi is a pro-Israel organisation. As such, most (if not all) of our charities are Israel-based, and we conducted ceremonies for Yom Hazikaron and Yom Ha’Atzmaut.”

Ezzes was contacted by AEPi headquarters following a meeting with the Australasian Union of Jewish Students (AUJS) at an international Jewish youth conference.

“They said that they’d love to open a chapter in Sydney, and they sent four representatives to show us the ropes, support us and help us get off the ground,” Ezzes said.

AEPi Sydney already has 20 active members, and “a whole lot more interest”, said Ezzes. “We’ve already held a few events and we have an upcoming Shabbat dinner with Chabad as well as some philanthropic events in the near future.”

Ezzes added that AEPi membership is an opportunity to branch out and make international connections.

“Plenty of Alpha Epsilon Pi brothers have gone on exchange and met members from all over the world, and it’s a great network to be a part of,” Ezzes said. “In the future, we are hoping for more membership, more involvement, to be able to do more charitable work and more community service here in Sydney.”

There are currently 186 active chapters worldwide. Although AEPi is based on Jewish principles, it it non-discriminatory and is open to anyone who shares its values. Notable alumni include Mark Zuckerberg, Paul Simon, Art Garfunkel (of Simon & Garfunkel) and Gene Wilder.

AEPi executive director Andrew Borans said, “Our mission – to develop the future leaders of Jewish communities – and our values are universal, and college students around the globe are looking for opportunities to learn leadership development and stand strong with Jewish communities across the world.

“We are willing to invest to open chapters throughout the world because our mission is so critical to the survival of the Jewish people. Especially now, with rising anti-Semitism and anti-Israel activity on college campuses, AEPi is an important way to train young men how to be leaders, advocates and better citizens,” Borans said.