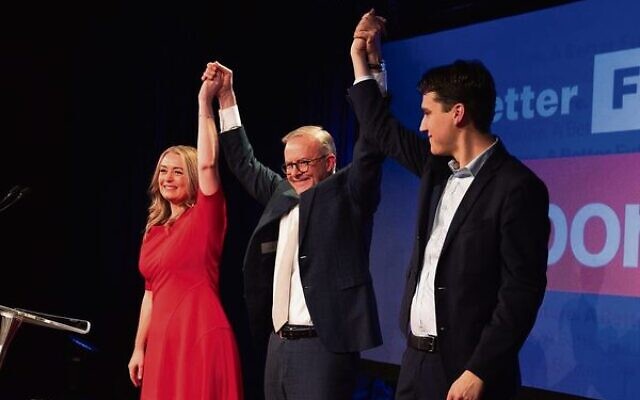 Israeli Prime Minister Naftali Bennett and Foreign Minister Yair Lapid have both congratulated their new Australian counterparts, while thanking the former government for its friendship in the wake of last weekend’s federal election.

“Congratulations to Anthony Albanese upon being elected Prime Minister of Australia. Israel and Australia are close friends and I look forward to working together with @AlboMP to deepen that friendship & strengthen the bond between our nations,” Bennett tweeted.

“I would also like to thank @ScottMorrisonMP for being a good friend and a valuable partner. I wish you all the best.”

I would also like to thank @ScottMorrisonMP for being a good friend and a valuable partner. I wish you all the best.

Albanese replied, “Thank you for the warm wishes @naftalibennett and I look forward to working with you to continue the strong relationship between our two nations.”

Expressing his congratulations to Australian Foreign Affairs Minister Penny Wong, Lapid said, “Israel and Australia are united by both common interests and shared democratic values, and I look forward to working together to deepen the friendship and partnership between our two nations.

“Thank you FM @MarisePayne for your friendship towards Israel, your strong support for Israel’s security, and your consistent partnership in our shared battle against terrorism.”

Thank you FM @MarisePayne for your friendship towards Israel, your strong support for Israel’s security, and your consistent partnership in our shared battle against terrorism. ???????? ????????

Local Jewish communal leaders have also congratulated Australia’s new government, while at the same time thanking the Coalition for its friendship of the Jewish community and paying tribute to departed members.

“While we may not always agree with each other, we anticipate that the relationship will always be based on mutual respect,” the ECAJ said.

“The Jewish community has lost a number of longstanding friends in the Parliament, such as Josh Frydenberg and Dave Sharma, all of them people of great talent, potential future leaders who are moderate in outlook and in tune with the times,” the federal roof body added.

“Hopefully, their talents will not be lost to us for long, and they will be able to find a pathway back into the Parliament.”

The ECAJ also congratulated the candidates who have been elected for the first time.

“We will reach out to those of them with whom we have not already established a relationship and look forward to working with them,” the ECAJ said.

“AIJAC looks forward to working with Mr Albanese and his government in the interests of Australia and our Jewish community and in further strengthening Australia’s strong relationships with Israel,” AIJAC said.

“AIJAC thanks Scott Morrison and the outgoing Coalition government for their achievements in steering Australia through the pandemic, in enhancing our economic welfare and national security and for their unswerving friendship to the Jewish community and support for Israel.”

Zionist Federation of Australia (ZFA) president Jeremy Leibler said Labor “has always been a great friend of the Australian Jewish community and an integral part of the bipartisan consensus on Israel”.

“Mr Albanese is committed to the Australia-Israel relationship, and to a negotiated, peaceful and democratic two-state outcome to the Israeli-Palestinian conflict,” he said.

“We also acknowledge the deep friendship shown by the outgoing Morrison government. Mr Morrison and his cabinet were committed to a strong Australia-Israel relationship, and were insistent that Israel be treated fairly.”

Zionism Victoria president Yossi Goldfarb thanked the “pro-Israel friends of the community” who had lost their seats for “their incredible support”.

“At the same time, we congratulate their successors and look forward to working with them in the months and years ahead,” he said.

“We also congratulate the incoming ALP government, and welcome the leadership’s commitment to a negotiated two-state solution, their express opposition to BDS and their adoption of the IHRA working definition of antisemitism.”

Meanwhile, the NSW Jewish Board of Deputies (JBD) paid tribute to former Wentworth MP Sharma – who was defeated by independent Allegra Spender – “for his loyal and unwavering support of the NSW Jewish community and Israel”.

“We thank him for his friendship and for always listening to our community’s concerns, and wish him all the best for the future,” JBD CEO Darren Bark added.

“We would also like to congratulate Allegra Spender … We are heartened by her recent statement, ‘I stand with Israel. I always have and I always will,’ and look forward to working with her and her team.”

National Council of Jewish Women of Australia (NCJWA) federal president Melinda Jones has lauded the increase in the representation of women in the new Parliament.

Jones said the increase of women at the highest level of power has significant impacts.

“It sends a very clear message to particularly young women, that the highest level of power is available to you, that being a woman isn’t a barrier and women can make a difference and have their voices heard,” she said.

“I think this incredible burst of women on the scene all at once is a statement that we’re here to stay.”

But while applauding the increase in women in the Parliament, Jones said there were still challenges to face.

“It’s one thing to get women into Parliament, it’s the next thing to deal with women’s issues,” she said.

She said it was imperative that the women in Parliament “stand up in whichever group of people they’re with” to raise issues that are important.