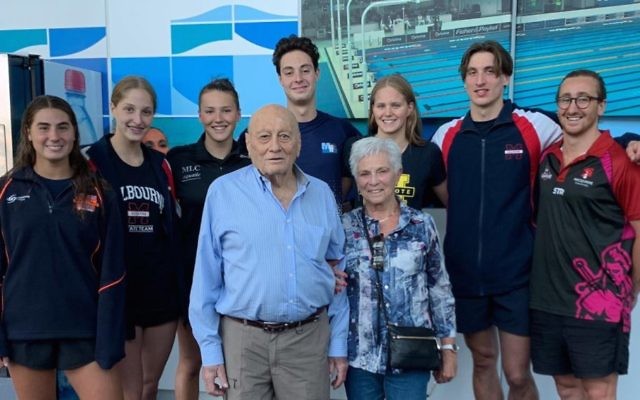 A HOST of Jewish swimmers kicked off the year in style at last weekend’s Victorian Open Swimming Long Course Championships held at MSAC, while under the watchful eye of living legend, Nachum Buch.

Buch, 86, became Israel’s first ever Olympic swimmer at the 1952 Helsinki games, competing in the 100m freestyle event as a 19-year-old.
When his competitive career finally concluded, he had competed in 15 Maccabiah Games, for Israel and Australia, in swimming and water polo, writing himself in the record books as a Maccabiah legend.

Today’s crop of Australian Jewish swimming stars met with Buch following the heats session on Saturday, and shared their experiences and mutual love for the sport, which transcended the generational gap.

Isabella Smorgon, a dual Maccabiah Games bronze medallist, told The AJN, “It was a privilege to finally meet the person behind the name that is so iconic in the Jewish world of swimming, and we are so incredibly grateful that he is still supporting us as swimmers and our sport.”

Growing up, Buch could be found swimming in a reservoir in Tel Aviv close to his home, and by age 12 he started competing.
A few years later he broke the junior Israeli record for the 100 metres freestyle, leading to his invitation to compete against Greece in Haifa for the Israeli national team. Still a teenager and without much coaching, Buch made history, along with 25 other athletes, as Israel’s first Olympians at the 1952 Helsinki Games.

Six years later he studied physical education in Germany, and further exhibited his talents in the pool, representing Israel in water polo.
Buch quickly became a trailblazer and sporting legend in Israel. He was invited to Yale University where he undertook a swimming coaching program, which led to an Israeli national coaching career, that took him to international events, most notably, the 1956 Melbourne Olympics.

Eighteen years later he returned to Australia, to live, and he brought his wealth of experience and knowledge with him, coaching privately and at AJAX Swimming Club, where he became a life member.

He wasn’t quite done in the pool either, going on to represent Australia at four Maccabiah Games as swimming coach, masters swimmer and water polo player and coach.

Hundreds of Jewish students also had the privilege of learning off a legend, as Buch ran Mount Scopus College’s swimming program for 12 years until he retired.

Levy and Benno Negri were the joint winners of the inaugural Nachum Buch Scholarship, launched by Maccabi Australia last year, which exists to assist emerging swimmers and water polo players on the path to the elite level.

The recipient of the second Nachum Buch Maccabi Australia Scholarship will be announced at a ceremony in the coming months.

The fund will make a single grant each year of up to $2000 for the next 10 years to emerging swimmers or water polo players to assist them on the path to achieving at an elite level.

Levy said “it was inspiring meeting him [Buch] and finding out what he has done in his life”.

“I’m sure all the young swimmers enjoyed the experience too, and learnt a lot from his presence.” 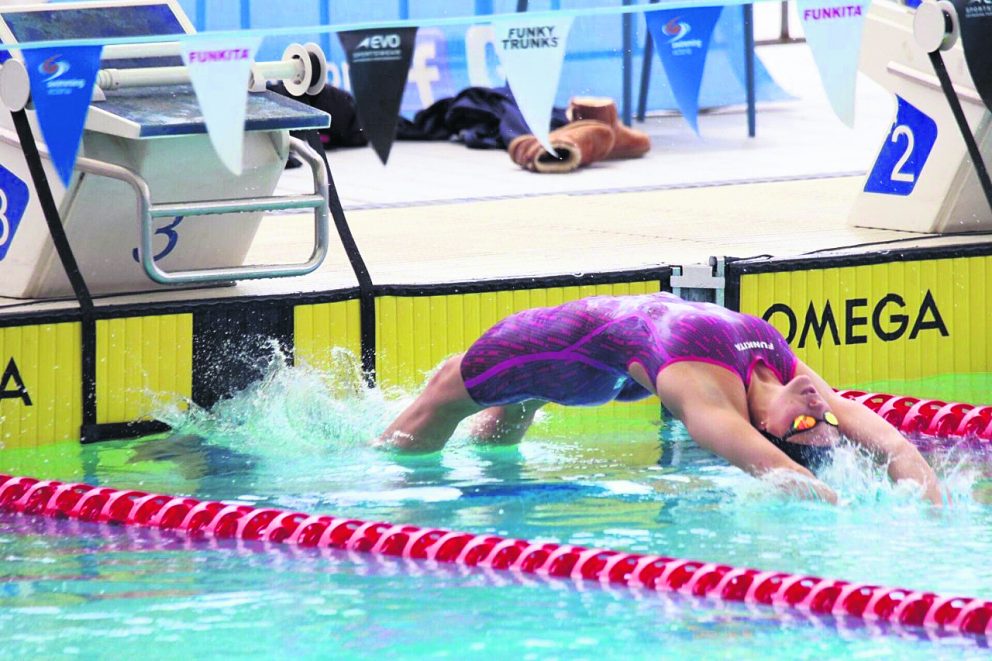 Ashley Weill in action at the 2019 Victorian Open Championships.

In MSAC’s outside pool, Benno Negri, who trains with Olympic gold medallist Mack Horton at Melbourne Vicentre, enjoyed medal success in the Victorian Open Championships relays, winning gold in the 4x100m medley, and silvers in the 4x100m freestyle and 50m mixed freestyle.

Individually, Negri was the first Victorian (fourth overall) behind Australian Olympic swimmer Cameron McEvoy in the 100m freestyle in a time of 50.72 and made finals in four other events, the 50m and 200m freestyle, 50m fly and 100m backstroke.

Jesse Nissen swam strongly in three backstroke events, while Macquarie University’s Zac Freuden made the final in the 200m butterfly with a time of 2:10.95.

In the women’s open events there was a quartet of Maccabiah swimmers on show, with Isabella Smorgon, Ashley Weill, Brooke Roseman and Jordana Marks.

Weill, a decorated member of Northcote Swim Club focused on backstroke and made the final of the 100m and 200m events, finishing fourth in the latter in a time of 2:18.06.

Weill’s medal-winning teammates from the 2017 Maccabiah Games, Roseman and Marks continued their good form with Roseman swimming in the triple sprint events, 50m butterfly, freestyle and backstroke, while Marks swam season best times in the 100m freestyle (1:01.16) and 100m butterfly (1:07.66).

Smorgon, who enjoyed medal success with the talented trio at the 2013 Maccabiah Games, said, “It is empowering to be part of a group of female swimmers who are so driven and dedicated to our sport and to share this unique bond.” 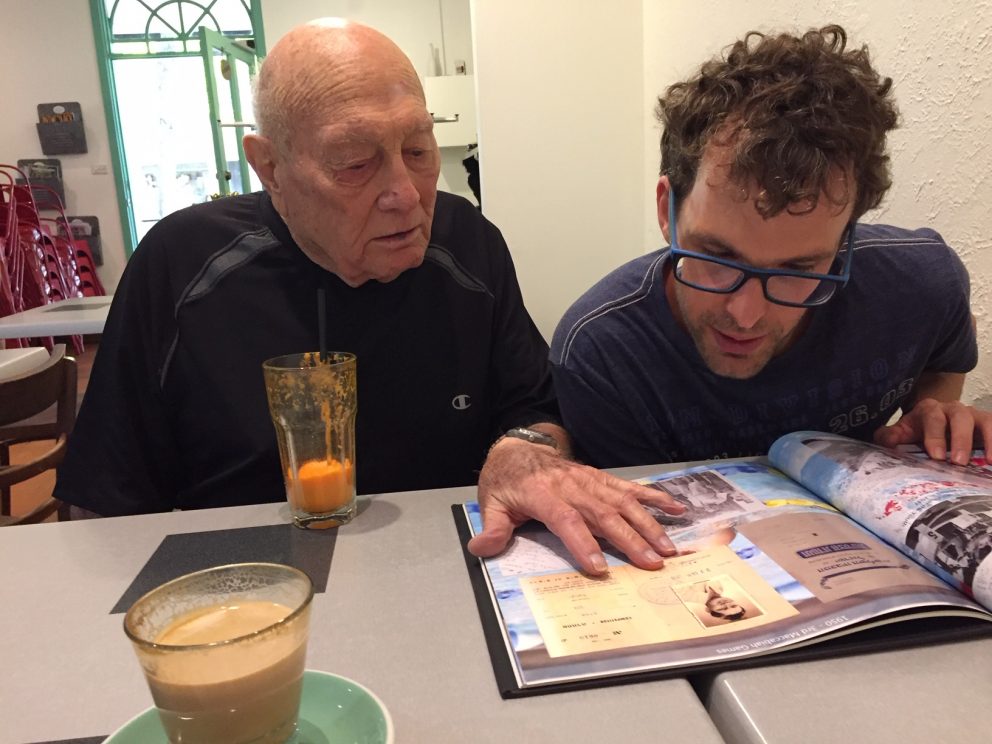 Levy used the tournament as a springboard to return to a full training program following a short break in January.

He competed in the men’s multi-class 50m breaststroke – coming fourth in the final won by Kazakhstan’s Alchemebu Anuar – the 50m backstroke (10th) and the 100m backstroke prelims (43rd).

Levy later tweeted “[It was] great to get back into training and get ready for nationals and worlds [later] this year.”

The next Para Swimming World Series meet for Australian team members will be in Singapore in May.