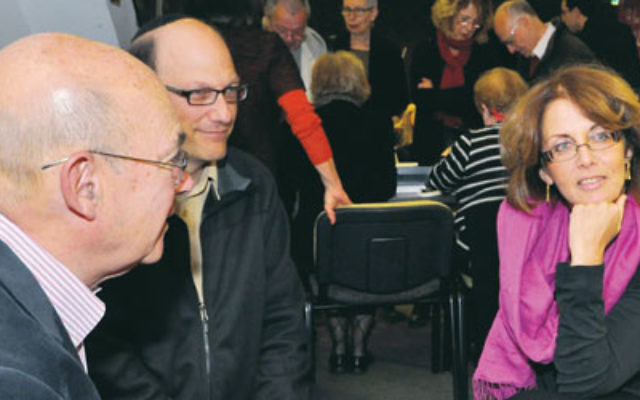 SEX, WikiLeaks, motherhood, the Holocaust, refugees, ethical journalism … just some of the issues canvassed at the Sydney Jewish Writers Festival.

Featuring the cream of the Jewish literary world from Australia and overseas, the biennial festival attracted hundreds through its doors at Shalom College at the University of New South Wales.

NSW Premier and festival patron Barry O’Farrell was on hand to start proceedings at “Reading Hour” on August 25.

The festival’s inaugural Lifetime Achievement Award was presented to acclaimed writer, novelist and human rights advocate Arnold Zable for his contribution to the literary sphere.

“It’s great to be recognised in this way,” Zable told The AJN.

“You sit down to write and bit by bit you build up a body of work, and then to be recognised in this way is a lovely thing and it does mean a lot.”

Festival director Michael Misrachi was thrilled with the success of the festival.

“We’ve had a wonderful response from the audience and the authors have had a great time,” he said.

“People are really enjoying the opportunity to delve into a tremendous range of issues and the fact that they can get up close and personal with the authors.

Joanne Fedler, the author of six books including The Reunion, said: “The wonderful array of speakers that the festival has got together is just always so astonishing.

“It’s wonderful that this festival can attract such high-profile interesting and controversial speakers. Every year, it just gets better and ­better.”

Fedler participated in a session called “Mum’s the Word” with blogger/author Kerri Sackville and author and ethicist Dr Leslie Cannold.

Danny Crossman, author of The Animal Code: Giving Animals Respect and Rights, said the festival had been great fun.

“I think the festival has got a really good buzz about it and everybody’s really friendly and enjoying themselves,” he said.

“But what I love is the diverse, really diverse backgrounds, experiences and opinions here,” she said.

One presenter with a particularly diverse background was Dr Ibtihal Samarayi, who recently published Refugee to Resident, a memoir about her journey from Iraq to Australia.

Sessions at the festival dealt with a variety of topics including the media, Israeli history and politics, blogging, self-publishing, writing biographies and short stories, and adapting stories to the screen.