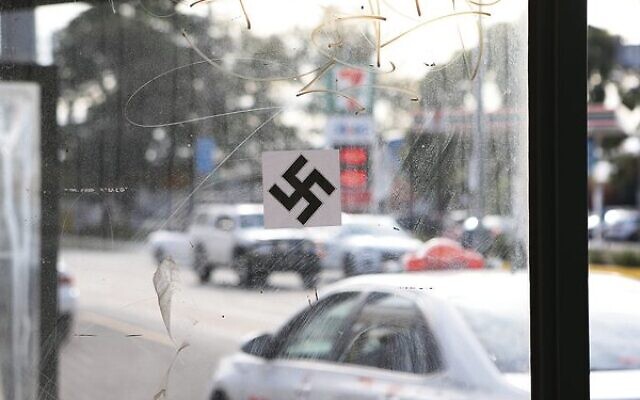 A swastika on a tram stop on Hawthorn Road in Caulfield. Photo: Peter Haskin

THE Jewish Community Council of Victoria (JCCV) has welcomed a report finding corrosive pressures on the community, exacerbated by the COVID-19 pandemic, have inflamed far-right extremism.

When the report from the Greens-led inquiry was released, Victorian Greens leader Samantha Ratnam acknowledged the role social media plays in spurring hatred from the far-right, “as more people were using digital spaces to connect” during the pandemic.

Stating the JCCV, AIJAC and OHPI “all stressed the importance of implementing measures to effectively monitor the prevalence of hate crimes in Victoria”, the report noted the JCCV’s specific support for setting up third-party, community-led reporting mechanisms in trusted community organisations.

It noted AIJAC executive director Colin Rubenstein’s observation that “far-right extremist groups and individuals saw an opportunity to use conspiracy theories as a recruitment tool”.

JCCV president Daniel Aghion told The AJN the committee has “adopted most of the JCCV’s proposals, including emphasising the ongoing importance of anti-racism and Holocaust education”.

“The committee also endorsed the JCCV’s recommendation to improve the collection of hate incident data to better understand the nature of extremism in Victoria.

“The committee agreed with the JCCV that politicians, community leaders and media should take care to ensure public debate promotes social cohesion and rejects extremist rhetoric.

“Importantly, the Parliamentary committee noted that antisemitism and Islamophobia are common elements of extremist ideologies and the impacts of antisemitism on the Jewish community, as well as Islamophobia, homophobia and other forms of bigotry, are whole-of-society issues,” he said.

Aghion added that the JCCV “looks forward to the Victorian government’s response to this report, which clearly outlines the threat posed by extremism in Victoria, including to our own Jewish community”.