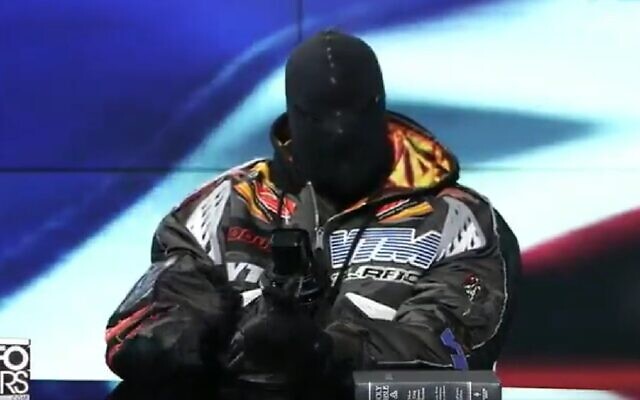 Kanye West seen during an appearance on InfoWars with Alex Jones on December 1, 2022. Screen capture: Twitter

Rapper Kanye West praised Adolf Hitler and said people should not criticise Nazis in an interview with far-right conspiracy theorist Alex Jones on Thursday, sparking a fresh round of condemnations of the antisemitic rapper who recently dined with former US president Donald Trump.

“I see good things about Hitler,” West, who also goes by Ye, told Jones during the bizarre appearance on the Infowars Network, alongside Holocaust denier Nick Fuentes. “Every human being has value that they brought to the table, especially Hitler.”

“I like Hitler,” he added later, and called himself a Nazi.

The interview with West, whose face was concealed under a black ski mask, also included antisemitic comments from Jones, who referred to a “Jewish mafia,” and Fuentes, an outspoken white supremacist who has been called West’s “campaign manager.”

Jones, a serial provocateur who has been ordered to pay hundreds of millions of dollars in damages for claiming one of America’s deadliest school shootings was a “hoax,” tried to push back against West’s praise for Hitler and Nazis, saying that “the Nazis were thugs and did really bad things.”

“They did good things too,” West said. “We’ve got to stop dissing the Nazis all the time.”

West also took aim at Likud leader Benjamin Netanyahu, set to retake power in Israeli in the coming weeks, claiming the politician was trying to take the rapper’s family away.

“Saying you ‘like Hitler,’ ‘love the Nazis,’ and spending all your time with a white supremacist makes one thing clear: Ye is a vicious antisemite. His comments today on InfoWars are not just vile and offensive: they put Jews in danger,” he tweeted.

The rapper was also condemned by others, including the Republican Jewish Coalition, which called the interview “a horrific cesspool of dangerous, bigoted Jew hatred.”

“Given his praise of Hitler, it can’t be overstated that Kanye West is a vile, repellent bigot who has targeted the Jewish community with threats and Nazi-style defamation,” it said.

Also quick to weigh in was Jewish Democratic Council of America CEO Halie Soifer who said, “As long as Donald Trump continues to embrace Hitler-sympathiser Kanye West, organisations that claim to support the safety and security of the Jewish people must explicitly disavow and condemn Donald Trump.”

Israel’s Ambassador to the US Mike Herzog said he was “sickened” by the Infowars interview. “At a time when antisemitism is on the rise, it is alarming that such vile rhetoric is given a platform and legitimised.”

Herzog said West, Fuentes and Jones “engaged in hateful incitement, which could lead to violence and the death of Jews in horrifying incidents.”

“Free speech does not extend to incitement of violence and denomination of the Jewish community, which faces the highest levels of religious-based violence in the United States,” he added.

This is just a shockingly antisemitic interview. However bad you think it is from the random quotes from Kanye today, it’s considerably worse. Overt Naziism that is making Alex Jones himself squirm.https://t.co/rYl6rYMrZT

West has come under vociferous criticism for a series of increasingly unhinged and strident verbal attacks on Jews over the last months, and has lost lucrative deals with Adidas and others.

Trump has also been slammed for a recent dinner meeting with West and Fuentes. The former president expressed admiration for West, but said Fuentes was brought along by the rapper and he did not know who he was, while declining to speak out against him.

Fuentes rose to prominence during Trump’s presidency as a far-right leader of the openly racist and antisemitic “Groyper” movement, and frequently makes antisemitic remarks. He has questioned how many Jews were killed in the Holocaust.

Following the Infowars interview, West tweeted “I love the first amendment! Long live Ye! I pray to Jesus that Elon is for real,” a reference to Twitter owner Elon Musk, who has rolled back moderation against hate speech on the site.