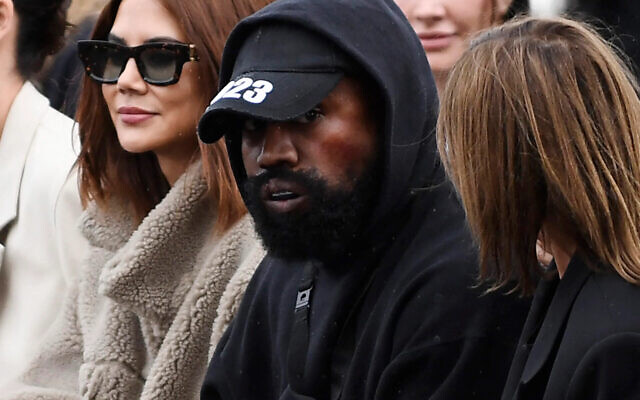 Years before his recent public antisemitic tirades that sank his reputation and cost him billions in endorsement deals, the rapper Kanye West had paid a settlement to a former employee over his use of antisemitic language.

In the previously unreported 2018 settlement, the anonymous former employee alleged that West, who now goes by Ye, had praised Hitler and Nazis in business meetings. West denied the claims in the settlement, but NBC News spoke to six former business associates of his who confirmed that he had a history of praising Hitler and uttering antisemitic conspiracy theories.

“With this pattern that’s happening and with the doubling and tripling down of all this, it’s pretty obvious that this is some kind of disgusting, hate-filled, strange Nazi obsession,” Ryder Ripps, a Jewish artist who worked with West for years and said he witnessed multiple instances of his Nazi obsession, told NBC.

A previous report from CNN also confirmed the existence of an apparently different settlement from another business executive who worked for West, who also alleged that the star had long been obsessed with Hitler, to the point of reading his antisemitic manifesto Mein Kampf and wanting to name an album after him.

Together, the reports demonstrate that West’s antisemitism was well-known among his associates and predates his threat last month to “go death con 3 on Jewish people.”

That outburst, along with follow-up comments in which West repeated antisemitic tropes about Jews controlling the media, led to major brands like Adidas, Balenciaga and Vogue ending their partnerships with him and celebrities including his ex-wife Kim Kardashian publicly showing their support for Jewish people.

The reports also raise questions about celebrity gossip site TMZ reportedly cutting out the star’s antisemitic comments from a 2018 interview he did with the outlet. Former TMZ employees said that, during a visit to the studio, West had praised Hitler and Nazis — comments that were not published in the online version of the interview, even though other offensive remarks he made about slavery being a “choice” made it into the final cut.

After that interview, TMZ founder Harvey Levin, who is Jewish, reportedly instructed his staff to “cut out anything related to Jews,” former employees told NBC.

Back on Twitter this week after Elon Musk’s acquisition of the platform, West posted a photo of Brooklyn Nets star Kyrie Irving in an ad for Nike, an apparent reference to the sportswear brand’s continued endorsement of Irving despite the athlete’s own recent bout with antisemitism. Irving has since issued a public apology for sharing a link to an antisemitic documentary, while Nike has issued a statement condemning antisemitism.