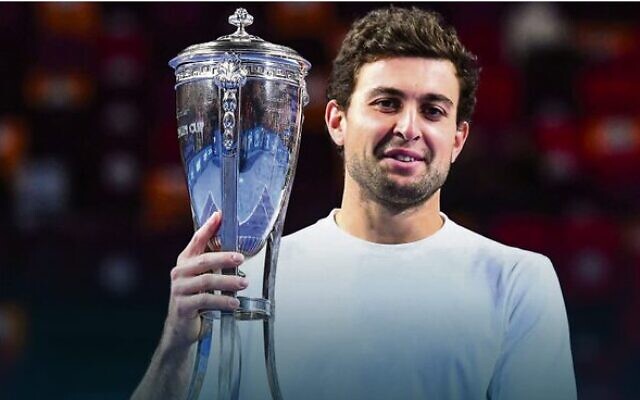 THE second round was as far as Russian-Israeli Aslan Karatsev had gone in four previous appearances at the Kremlin Cup tournament in Moscow, but he emerged as the 2021 champion after defeating Croatian third seed Marin Cilic 6-2 6-4 in the final.

Karatsev, who speaks Russian and Hebrew, advanced to the final without dropping a set in wins over Egor Gerasimov, Gilles Simon and Karen Khachanov.

He broke Cilic in the first game to set the tone for the final, served well throughout, and dominated with regular backhand winners to keep Cilic on the back foot.

“It’s a dream come true,” Karatsev said, “because it is a tournament where I have [previously] played as a qualifier, and now I am winning the tournament.

“I was very nervous in the final game [of the match], but I managed to win it in the end.

“I would like to dedicate my win to my mum and my father.”

Karatsev’s mum and sister still live in Tel Aviv, where he spent part of his childhood.

The 28-year-old currently lives in Belarus.

Last month was also a good one for Jewish Argentine player Diego Schwartzman, who finished runner-up at the ATP men’s tournament in Antwerp.

Schwartzman lost in straight sets in the final to the tournament’s top seed, Italian Jannik Sinner, but enjoyed solid wins to get there, against Andy Murray, Brandon Nakashima and Jensen Brooksby.

And Jewish Italian Camila Giorgi made the semis of the Tenerife Ladies’ Open, but was edged 4-6 5-7 by Colombian Maria Camila Osorio Serrano.