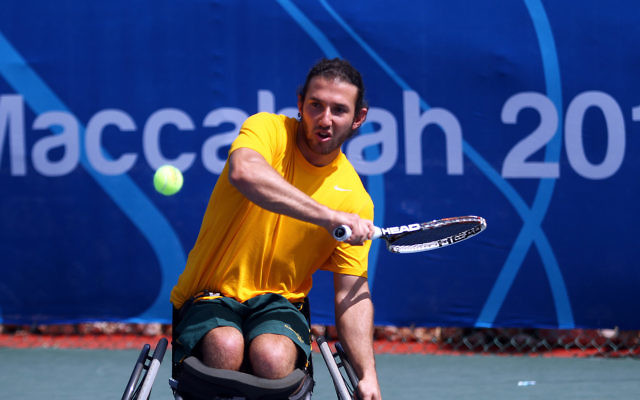 As The AJN went to press last week, the Aussies had picked up six medals in total, including a historic silver to swimming sensation Marni Burger, who became the first open competitor to medal in 20 years, and three bronze medals.

But before a whistle was blown, or a starter’s gun fired, the opening ceremony dazzled, befitting the jewel in the Jewish sporting crown. Australia’s delegation held its breath as the 400- strong contingent marched in front of more than 30,000 fans, led by flag bearer and Olympic hero Steven Solomon.

“I was brought to tears by the emotional experience – it’s been very, very special and just wonderful to be here,” Australia’s oldest athlete, Bert Rosenberg, 81, told Maccabi Australia.

Maccabi Man – similar to iron man – competitor Adriel Young added: “I’ve never experienced anything like it before, to walk out to a crowd like this is mind-blowing.”

With the official proceedings out of the way, competition for the 39 sports got underway.

Kellerman went into the singles event a hot favourite, with Israeli tennis star Noam Gershony pulling out of the competition.

The 22-year-old completely dominated from day one, failing to drop a set for the tournament and winning the final 6-1, 6-1 against Canadian Joel Dembe.

But he wasn’t finished yet, hitting the court with Israeli doubles partner Amir Levi to topple the Canadian pair 6-2, 6-4 and pick up two gold medals in the one day.

“It means a lot being here and representing Australia in a major competition, especially the uniqueness of the Maccabiah Games,” Kellerman said.

“I’m proud to have been able to represent my country here in Israel and win the first two gold medals for Australia.”

Kellerman will now head to Belgium for an international tournament, where he will celebrate his birthday for the third consecutive year.

Meanwhile, the Aussies opened up their medal tally in the pool with a silver and two bronze medals.

Burger became the first open swimmer to medal since Andrew Maver won bronze in 1993, placing second in the 100m butterfly, while the men’s and junior girls’ 4x100m freestyle teams came in third place in their respective events.

In other action, Australia’s cycling team also picked up bronze, coming in third place in the team category of the time trial.

“Winning the team bronze and being part of the select group by beat- ing Canada, South Africa and Great Britain really made me feel proud,” team captain Sean Bloch said.

“I really believe that the whole team did themselves proud and achieved great results across the board.”