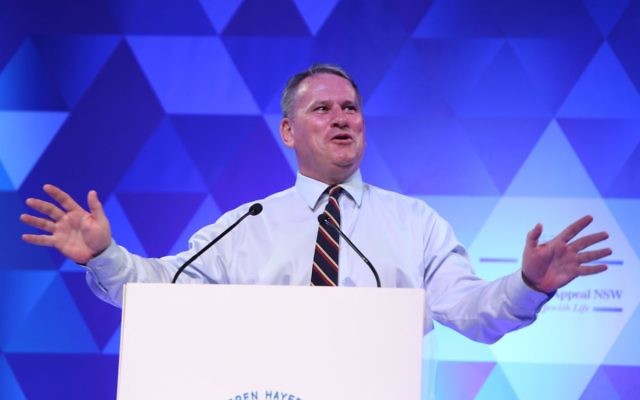 One of the keynote speakers at the United Israel Appeal’s (UIA’s) General Division functions, Kemp was in Israel last year during much of the duration of Operation Protective Edge, where he was in contact with ground troops, generals and politicians.

He said the judgments he formed from his observations were the “mirror opposite” of the “lies, distortions and abuse” reported in the international media.

“The first item on the agenda of every war cabinet meeting … was Palestinian civilian casualties. That tells you something serious about the priority and the emphasis given by the Prime Minister and his cabinet to the issue,” he said.

He said Hamas wanted dead civilians to show the world, in order to demonise Israel “because they know – it’s been proven time and again in history – that the IDF cannot be defeated militarily”.

He also recalled his visit to a Hamas tunnel.

“There were railway lines running down the floor of the tunnel,” he said.

“Something troubled me about that tunnel, I couldn’t work out what it was and then it came to me. A few months before I was in Auschwitz and I saw similar feats of engineering … but on a much larger scale.

“The purpose of both of those things was to kill Jews. The tunnel was intended to send Hamas fighters to massacre as many Jews as they could find.”

Having already spoken out against the discredited Goldstone report, Kemp said he didn’t have much confidence that the UN investigation into “Israeli war crimes” during last year’s conflict – to which he gave evidence – would contain accuracy and balance.

“To an extent that report was written before the investigation even began,” he said.

He concluded by saying: “Israel is one of the greatest nations on Earth and it will stand until the end of time. And Israel will not stand alone.”

Another speaker, Iron Dome rocket defence system inventor Brigadier General (Res.) Dr Daniel Gold, told how in the beginning, no one believed his system could become a reality.

“Everybody said to me no, don’t do it. They thought it was science fiction,” he said.

He persevered, he said, because “I cannot stand to see people getting killed in Israel”.

“Of course at the end everybody supports [it]. Now the need is well understood,” he added.

The system has analysed more than 6000 rockets since 2011, destroying only those headed for populated areas where they would cause deaths.

Gold also revealed he is currently working on a system which will be able to intercept an Iranian nuclear warhead in space, should that nation develop such weapons.

Ofir, who lost friends in the attack, provided cover fire so the wounded could be evacuated, sustaining his own serious wounds in the process.