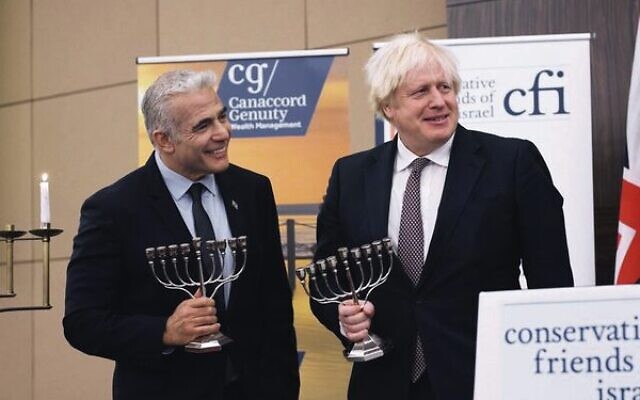 WRAPPING up a three-day trip to London and Paris, Foreign Minister Yair Lapid emphasised to French President Emmanuel Macron on Tuesday Israel’s position that sanctions must not be removed from Iran, and that only a credible military threat will stop Tehran’s nuclear program.

According to the Foreign Ministry, the two spoke at length about the Iran nuclear talks in Vienna, which kicked off on Monday after a nearly six-month hiatus.

Lapid told Macron that Israel believes Iran is merely buying time at the talks in order to continue making progress in its nuclear program, and to gain relief from crippling economic sanctions. Israel’s top diplomat also emphasised the need to develop an effective Plan B if talks fail. 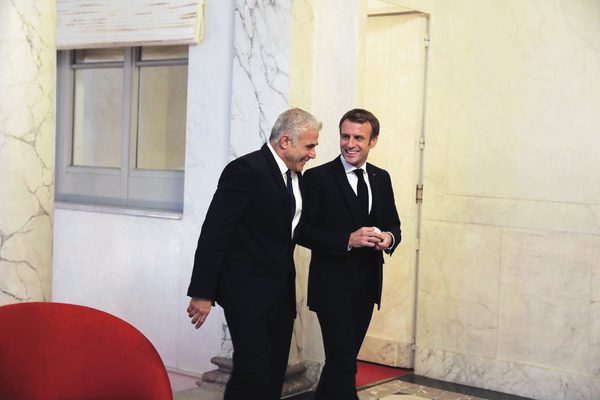 Lapid’s talk with Macron came a day after the French leader spoke with Iranian President Ebrahim Raisi, who demanded the lifting of sanctions as a first step to re-entering the nuclear deal.

Speaking to the UK’s Conservative Friends of Israel on Monday afternoon alongside Prime Minister Boris Johnson, Lapid delivered an impassioned address against moral relativism, arguing that Israel and Britain were forces of good fighting against evil movements like Nazi Germany, Iran, Hezbollah and Hamas.

“Britain taught the world an unforgettable lesson,” said Lapid, after speaking about his father’s experience in the Budapest Ghetto. “Whoever is unwilling to fight for freedom won’t get it.

“It is still true today,” he continued, “when terrorism threatens us all. When religious fanatics push to get their hands on nuclear weapons.”

Lapid then turned to those in the West who treat any use of force by powerful states as unjustified. “That there is no such thing as a just war, that no one has the right to take up arms in defence of a principle – this is not only a defeatist approach, it also represents ideological laziness,” he said. “There is such a thing as good and evil.

“Not everything is someone’s narrative, inherently worthy of our respect,” Lapid continued.

He also assailed “the industry of lies” that uses international law and democracy against those countries – a reference to Israel first and foremost – that uphold liberal democratic principles.

Lapid asserted that Israel, having learned the lesson of the ghetto, will defend itself against Hamas, Hezbollah, and other terrorist groups.

Johnson emphasised Britain’s support for Israel “to defend itself without equivocation from hostile states like Iran”.

He added, “We hope that diplomacy can work. But while the nuclear issue is the most urgent, Iran’s overall behaviour has to change. Attacks at sea, the support for terrorism, the destabilisation of the region all form part of the same pattern.”

In advance of their meeting, Lapid and his British counterpart, Liz Truss, published an article on Monday in the Daily Telegraph newspaper saying they would “work night and day to prevent the Iranian regime from ever becoming a nuclear power”.

Truss added in a statement that the UK wanted Iran “to agree to the original JCPOA”, but warned that if the talks “don’t work, all options are on the table”.

European Union-sponsored negotiations aimed at saving the 2015 nuclear agreement between world powers and Iran started on Monday in Vienna.

The US – which pulled out of the deal under former president Donald Trump – is only participating indirectly in the negotiations.

The Biden administration has repeatedly said that it would only lift sanctions in return for concrete and evident changes in Iran’s behaviour, and that not all sanctions would be lifted.

According to Reuters, European diplomats told reporters that negotiators are still waiting to see if the talks can pick back up where they left off in June, before they were suspended and before the election of the hardline Raisi.

Diplomats from France, the UK and Germany said that the issue of Iran’s centrifuges – which it is using to enrich uranium to levels way beyond that agreed to in the 2015 deal – remains an unresolved issue.

If Iran does not show it is serious about returning to negotiations, the talks could quickly stall, they reportedly said.

Iran ignored appeals from Western countries to restart the talks for several months, all the while strengthening the capabilities of its nuclear program in violation of the accord.