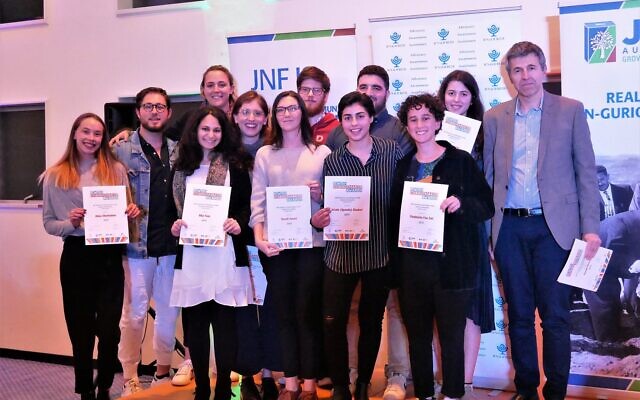 NOMINATIONS for this year’s B’nai B’rith and JNF Jewish Changemaker Awards have been extended until Monday, October 25 with members of the community encouraged to enter anyone aged 14-35 who is making a difference to our society.

This year’s awards, supported by The AJN, include the inaugural Joshua Levi Young Professional Award in honour of the late AJN CEO who passed away last year, aged 36.

Two judging panels have been tasked with selecting the winners of the volunteer and professional award categories, with each winner under 18 taking home $700 and those over 18 receiving $1000.

The Levi family has donated $5000 to the winner of the Joshua Levi Young Professional Award.

“Josh was passionate about encouraging the development of young talented people in our Jewish community,” his brother Ben – one of this year’s judges – told The AJN.

“I am honoured to be representing the Levi family and look forward to meeting some clever people with big hearts who are making a positive impact in the lives of others.”

The Orah Fund’s Carole Pillemer, who is also on the judging panel, commented, “It is wonderful to see these passionate individuals in our community making a difference and honour them all in what is often behind the scenes hard work. I love seeing passion, innovation and imagination when it comes to making change.”

B’nai B’rith Alfred Dreyfus Unit president Ernie Friedlander said, “We are fortunate to have such highly-qualified judges. It is not an easy undertaking and it involves considerable time and experience to make the selections out of so many worthy candidates. We greatly appreciate their upcoming efforts.”

JNF’s Etty Ayalon said, “Our nominees should be excited by the prospect that their nominations will be reviewed by such prominent and influential leaders.”

AJN CEO David Redman concluded, “In addition to recognising the essential work of those who have volunteered their time to help various community groups during a very challenging year, we are also excited to expand the awards to recognise those working professionally in our community organisations and for this new award to be named after Josh.

“With increased prize money and career opportunities, being named a Changemaker is even more valuable, and we encourage people to get their nominations in now.”

To nominate a Changemaker, visit australianjewishnews.com/changemakers.