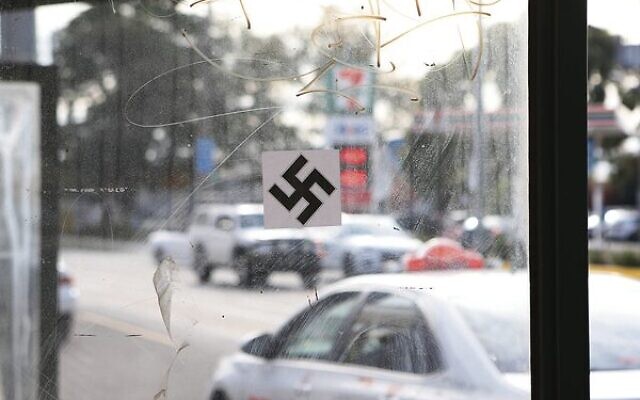 JEWISH community leaders have praised Monday’s conviction of a man who put up more than 50 swastika stickers after the Victorian government announced laws criminalising displays of the Nazi symbol.

Jimeone Roberts, 29, associated with the extremist National Socialist Network, affixed the stickers around Caulfield on May 12, the day after the announcement. He was assisted by Jack Darren Bell, 21, who is charged with behaving in an offensive manner.

Moorabbin Magistrates’ Court heard Roberts and Bell attached the stickers to premises including the office of Caulfield MP and Deputy State Liberal Leader David Southwick, a strong advocate of the swastika ban.

Prosecutor Senior Constable Andrej Trajkovski said prison was an option, as Roberts had been motivated politically. However, Magistrate David Starvaggi, describing it as “one of the most disgusting, vile, repugnant acts of antisemitism and racial behaviour that I have ever seen”, imposed an 18-month community correction order, stating Roberts was only saved from jail by his guilty plea.

Jewish Community Council of Victoria president Daniel Aghion noted Beth Weizmann Jewish Community Centre was one of the buildings vandalised. With the swastika ban due to begin no later than December 28, he added, “Regrettably, this offender will not face the full consequences of this law.”

Beth Weizmann chair Sam Tatarka said the centre’s security team helped authorities trace the perpetrator. “We are thankful that the state-of-the-art security measures we have in place are able to help ensure the safety of all who visit and work here.”

Anti-Defamation Commission chair Dvir Abramovich said the conviction “sends a strong signal that our community will never tolerate such vile expressions of neo-Nazism”.

Southwick said the swastika spree in an area that is 40 per cent Jewish was “hugely offensive”.