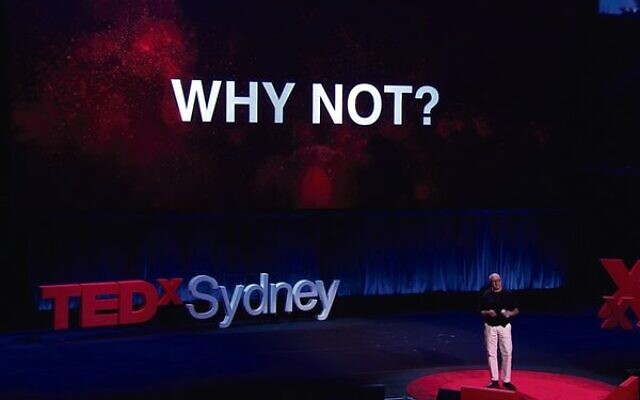 TEDx comes to Sydney this Friday.

THERE are over 3000 annual TEDx events around the world but Cheryl Bart says TEDxSydney, which returns this weekend for the first in-person event in three years, is widely regarded as “the pinnacle event”.

Bart, a successful Jewish lawyer and company director, is chair of the board of TEDxSydney.

“TEDxSydney has consistently delivered one of the biggest and most highly produced TEDx events in the world,” Bart told The AJN.

“We have done so consistently every year without a break since 2010.

“If you look at the range and depth of our speakers over that time you will see all the current major issues of the globe covered and also ideas and talks which are way ahead of the curve in terms of content and innovation.

“To quote Chris Anderson, the head of TED, ‘TEDxSydney holds a place of exceptional leadership and is indeed regarded as the gold standard for the TEDx network globally. It is very influential and has earned a reputation for excellence and format innovation.’”

Bart said the TEDxSydney mission is to connect people with ideas and it has always had specific programs for the youth, because “clearly they are our future”.

“It is also a community of people and organisations who share a belief in, and passion for, the power of those ideas to change perspectives, lives and ultimately the world.”

“The global TEDx movement is best known for amplifying ‘ideas worth spreading’ born from local communities. Licenses are granted to cities rather than countries and some cities host small events and some host rather large events.”

For any aspiring members of the Jewish community hoping to get onto the TEDx stage, Bart said they should come along to TEDxSydney and “become part of our community”.

“They can also respond to calls made through the year for involvement in pitch nights,” she added.

“If they are selected, the TEDxSydney curatorial team, who are just amazing, will work with them, culminating in one of our amazing talks which are also streamed.”

Bart said the success of TEDxSydney is due to its leadership, the spread of ideas and the “awesome” sense of community that it has created.

“I love the brilliant TEDxSydney team, the volunteers and of course our board who work together to create our main event each year and a number of events through the year,” Bart said.

“It’s inspiring and educational. It is through the spreading of ideas and then the robust discussions after, together with the leadership roles and communities we have created, that problems can be solved.”