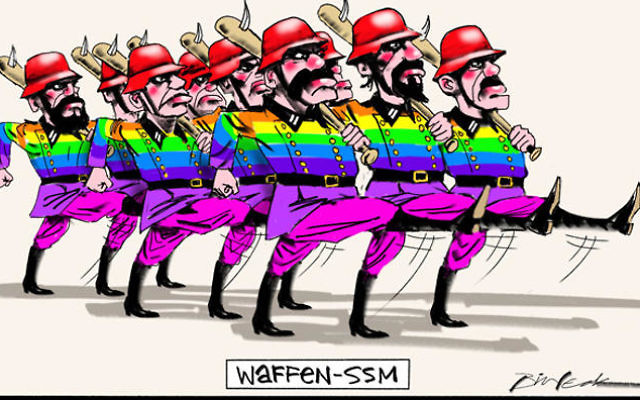 A CARTOON comparing equal marriage advocates to the Nazi stormtroopers has been slammed as “repulsive”, “unacceptable” and “an inversion of history”, by leaders of the Jewish and LGBTQI+ communities. Cartoonist Bill Leak’s image, titled “Waffen SSM” (a play on the initials of same-sex marriage), published in The Australian last Wednesday, depicts a group of men dressed in rainbow uniforms goose-stepping in formation with spiked batons.

“No matter how strong Leak’s objections to marriage equality advocates are, to compare them to the Waffen SS, part of Hitler’s demonic regime and responsible for the murder of millions, only adds to the cynical debasement, twisting and abusing of the Holocaust so prevalent today,” said B’nai B’rith Anti-Defamation Commission chairman Dvir Abramovich.

“To draw such repulsive equations is deeply offensive, shows a gross lack of understanding of the historical truth, and only fans the flames of hatred and demonisation of the LGBTI community. It also insults the memory of the victims, which included gay people, as well as hurts the survivors and all those who fought valiantly against the Nazis in WWII.

“Such analogies are totally unacceptable, even in satirical cartoons, and only serve to coarsen public debate.”

Echoing the sentiment, NSW Jewish Board of Deputies CEO Vic Alhadeff told The AJN, “Such conduct trivialises the evil of Nazi Germany and seriously maligns the subject of the comparison.”

Jewish LGBTQI+ group Dayenu leader Alex Linker, whose grandparents and great-grandparents “lived through the horrors of Nazism”, was “insulted that Leak would compare same-sex marriage advocates to the SS without regard to all the queer and Jewish people who were decimated by SS soldiers”.

Noting that in Nazi Germany homosexuality was a criminal offence and  approximately 100,000 suspected homosexuals were arrested and up to 15,000 of them were interned in concentration camps where many were tortured and killed, Executive Council of Australian Jewry executive director Peter Wertheim said, “As a political cartoonist, it is Bill Leak’s job to be provocative and controversial, [but] to liken any advocate of -same-sex marriage to the perpetrators of mass murder and cruelty in the Nazi era is an inversion of history.”

This is not the first time that Leak has attacked advocates of -same-sex marriage. When Bob Katter’s gay half-brother made headlines in 2011, Leak drew a cartoon showing the politician discussing a “new law that would allow gay couples to get married”. In the background, a man standing with his arm around a kangaroo says, “We don’t think it goes far enough.”

In August, Leak widely was criticised for a cartoon that depicted Aboriginal people as drunk, absentee parents who don’t know their children’s names. Leak defended his work and called his critics “sanctimonious Tweety Birds having a tantrum”.

The AJN sought a response from The Australian, but the newspaper declined to comment.