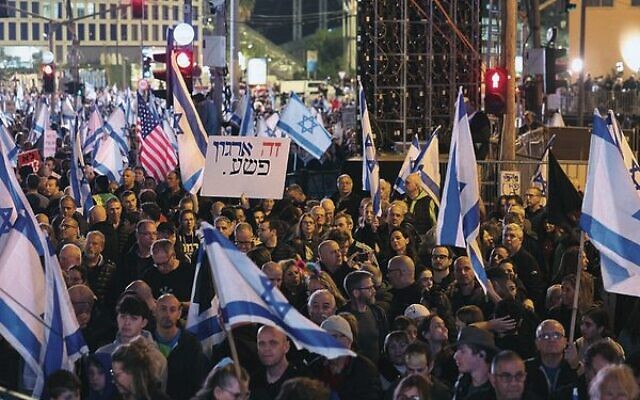 ZIONIST Federation of Australia (ZFA) president Jeremy Leibler has urged Australia’s Jewish community to speak up in relation to the current protests in Israel.

Record numbers have gathered in Tel Aviv to protest against the new government’s proposals for radical reforms to Israel’s judicial system.

“The protests in Israel included the left, right, religious and secular, reflecting how seriously many Israelis view the proposed judicial reforms,” said Leibler.

“While many Israelis support judicial reform, to ensure the balance between the role of elected Knesset members and an independent judiciary is appropriately maintained, there are clearly extreme elements within the government who wish to completely strip the Supreme Court of its independence. This would have catastrophic consequences for Israel’s democratic system. Ultimately, it is Benjamin Netanyahu’s responsibility to ensure that any reforms reflect Israel’s character as a Jewish and democratic state, as enshrined by Israel’s declaration of independence.

“These are unprecedented times and Diaspora Jewry have an important stake in the outcome of these decisions. There has never been a more important time for the Australian Jewish community to lean in and engage openly, thoughtfully and respectfully in relation to these issues. The ZFA will continue to provide a platform for the Australian Jewish community to do exactly that.”

Executive director of the Australia/Israel & Jewish Affairs Council (AIJAC) Colin Rubenstein said: “The weekly protests by opponents of the reform proposals are evidence of both the deep divisions they have engendered, as well as the vibrancy of Israel’s democratic political scene.   AIJAC hopes and expects that, despite the current, anger, anxiety, and even hysteria, Israel’s vibrant, 75-year-old democracy can and will ultimately handle such difficult issues.”